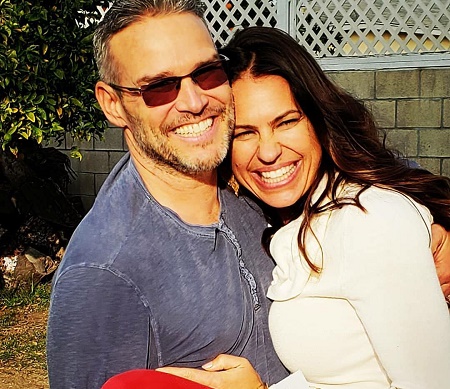 Adam Burks, a retired US Marine Corps, and Jessica Mendoza, a member of the Sunday Night Baseball team at ESPN, have been happily married since 2006. The pair also have two sons: Caleb Ashton Burks, 10, and Caden Adam Burks, 5.

Burks is a former high school athlete who has played several sports. Whereas  Jessica is recognized as the Sports Broadcaster for ESPN and former softball player. Here's what you need to know about the journey of love for Adam and Jessica.

First Met at a Southern California Wedding in 2004

The assistant engineer Adam first met his future girlfriend, Jessica Mendoza at a Southern California marriage party in early 2004.  During that period, the 39 years old Mendoza was a member of the American softball team.

It is believed to love at first sight for them and so they did not hesitate to begin dating each other. They agreed to take the romance to the next level after two years of intense bondage. And finally, they tied the knot on 30 September 2006 in Southern California wedding.

The pair are living together for a decade and has a pleasant and joyous life. So far there are no reports or rumors between them concerning any kind of extra-marital affairs.

Burks and his wife, Mendoza gave birth to their first child Caleb Asthon Burks in 2009. Again, the couple had their second son Caden Adam Burks in 2013.

After births of the first child, a native of the United States of America, Adam quit his job and stayed home, looking for his kids. Since then, he takes all the responsibilities of the mother and father cause of Jessica's busy schedule.

Once, the broadcaster said in an interview with Daily News that her husband is already taking care after his mother. “Oh, Caleb already looks and acts just like his mom,” she stated in the interview.  “I laugh, and I sigh, because I know she’s going to have her hands full… But one of these days, this kid will be special just like she is.”

Burks went to study at the University High School, from which he graduated in 1987. After that, he went on to study at Eastern Washington University.

Later, Adam then joined the U.S. Marine Corps and started serving with Desert Storm in Iraq. After that, he began to work as an assistant engineer at the Ventura County for Moorpark, California but then quit in 2009.

The one time former US marine corps now stays at home to take care of his two boys.  Mention to that, parents of Jessica who live in the town of Camarillo are always helping Burks take care of the kids.

Burks became a stay-at-home dad two months after their first son Caleb, now 10. At that time Mendoza was regularly playing softball. And today that is because she is constantly touring the country to cover ESPN baseball.

Known as the Supportive Husband of Jessica, 39

As we all know, Adam Burks is well regarded as the very encouraging life partner of American sports presenter, Jessica Mendoza. The former softball player, standing at 5 feet and 9 inches long, is currently serving as ESPN's sports broadcaster.

The crazy mother of two, Jessica was a four-time All-American outfielder at Stanford University for the Stanford Cardinal from 1999 to 2002. Moreover, from 2016 to 2019 she was an analyst at ESPN's Sunday Night Baseball. She also received a gold medal at the 2004 Athens Olympics and a silver medal at the 2008 Beijing Olympics.