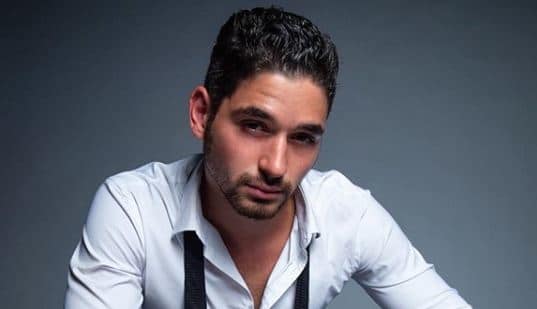 American professional ballroom and Latin dancer, Alan Bersten is one of the renowned personality. He is also a choreographer and has given his talents to many superstars and artists. And he is currently working on Dancing With The Stars. Since 2013 he is performing as a dancer in the industry. Previously he was a robust contestant of So You Think You Can Dance.

Alan was born in Minnetonka, Minnesota, the U.S, on 26th May 1994. His ancestor belongs to Russia. From the age of seven, he started dancing. And here he is now one of the world-famous dancers of all time. Further, he is the season 28 winner of Dancing With The Stars.

What is his current relationship status?

Alan's current relationship status is marked as single. He hasn't been any sort of relationship and affairs as of now. Though previously, he has been highlighted many times due to his relationship with different personalities. But as of now, he is enjoying life as single.

He has even uploaded a funny video regarding he is single in his official Instagram account. Further, he loves spending time with his dancing crew and family in his free time. Also, he is seen traveling in various places by exploring them.

However, he was previously rumored of dating his partner Hannah Brown who is The Bachelorette star. Though they won the season's championship together, neither of the parties has confirmed their relationship.

Alexis Ren and Alan's relationship was one of the highlighted relations in the dancing industry. The two were dance partners before dating one another. It has been reportedly confirmed that they found each other on the dancing platform.

Bresten even stated that “I’m in a place where we worked so hard for this amazing journey together, and I’m afraid I will mess that up in some way,” he told her. “But I’ve never had an experience like this.

It’s so easy to just hang out with you and have fun and not worry about everything else. I know that you put yourself out there last weekend, and I do have feelings for you. And I feel like I am falling for you.”

Break up with Ex-Girlfriend, Alexis Ren

However, just after enjoying several years of togetherness, the couple split in mutual understanding. Due to living in a separate country, it has been challenging for the pair to continue their relationship. Alexis is currently in Japan working while Alan is in L.A.

Despite their separation, the pair are still very close to one another and are planning to always remain in each other's lives. As of now, Alan is enjoying a single lifestyle while Ren was reported of dating fellow model and actor Noah Centineo Which was later confirmed by the Noah publicly via a post on his Instagram.

How Rich is Alan Bresten?

Alan has a net worth of over $500,000; however, it hasn't been officially confirmed yet. But being one of the hardworking personality, his fortune inevitably falls in a similar number.

He is also a choreographer by profession and has taught many immense personalities. From which he is undoubtedly earning a right amount of remuneration. His annual income is over $100,000 by engaging in various fields.