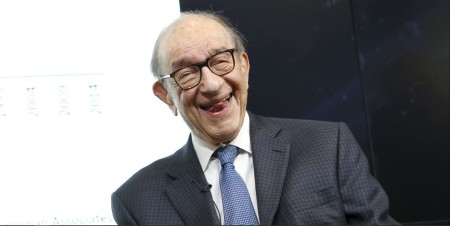 American economist, Alan Greenspan is the former chief of the Federal Reserve of the United States. He is also best known as the 10th chairperson of the Council of Economic Advisers. He is currently serving as a private advisor for his pension administration company, Greenspan Associates LLC.

Greenspan was born on 6th March 1926 in Washington Heights, New York City, New York, United States, and raised in the Jewish faith. He is the son of Herbert Greenspan (father), a stockbroker and market analyst, and Rose Goldsmith (mother). Apart from all this, he is a married man.

Who Is Alan Greenspan Married To?

The 93-year-old economist, Greenspan is sharing his quality time with an American TV journalist, Andrea Mitchell in a blissful marital union. The two united as husband and wife on 6th April 1997 at The Inn at Little Washington, a 5-star hotel located in Washington, Virginia, performed.

More to that, the bride was 20 years than the groom, who was 71 at the time of their nuptial. Their marriage was performed by Ruth Bader Ginsburg, who was the associate justice of the Washington-based Supreme Court.

How was The Pair's First Interaction?

The couple met for the first time in 1984 when Ronald Reagan was the President of the United States. Shortly after their first meeting, Alan invited Andrea to his apartment to read his novel on monopolies. The duo then began dating and got engaged after dating for 13 years.

The pair are keeping up a positive way in their marital and maintains a strong bond from more than two decades. Back in 2019, the couple celebrated their 23rd marriage anniversary on the 6th of April.

The former chair of the U.S. Federal Reserve, Greenspan was initially tied the knot with a Canadian artist, Joan Mitchell. Their wedding ceremony was private, which was held in 1952.

The newly-wedded pair's marriage didn't last long for than a year, citing irreconcilable differences. The duo later separated amicably in 1953, which Greenspan also described in his book, Greenspan: The Man behind Money.

After the divorce, Greenspan met an American broadcast journalist, Barbara Walters and started dating in the late 1970s. The duo eventually split up due to some misunderstandings in their relationship.

On the other side, Greenspan's current wife, Andrea was committed to her first husband, Gil Jackson, an author. Their marriage, however, ended with a divorce settlement in the mid-1970s.

Blamed for the Financial Crisis

American economist, Greenspan found himself in a major challenge after the stock-market of his company, Greenspan Associates LLC goes below the ratings while preventing the 1987 financial crisis. During the time of the 1990s, he conducted the long economic and financial market at its loss.

After facing the financial boom, Alan put his low-interest rates in the company's financial status, which caused the leading crisis of mortgage at the beginning of the 2000s. During an interview with The Maestro, it was admitted that Greenspan "made a mistake in presuming" his company's stock in a long-standing regulation.

In Charles Ferguson's 2010 documentary film Inside Job, Alan was named as one of the victims of the financial crisis of 2007-2008. The Time Magazine also listed him as one of the "25 People to Blame for the Financial Crisis" in 2013.

Alan Greenspan has a net worth of $20 Million as of 2020. He currently earns a handsome remuneration as the private adviser of his company, Greenspan Associates LLC. So, he might be receiving an annual payroll of $127,949 as per the income of a private adviser in the United States.

Greenspan and his current spouse, Andrea are living a luxurious life in their Washington DC-based house. The price of their accommodation is $2.3 Million, which consists of five bedrooms, four full and one-half bathrooms.

Following this, Alan wrote and published a book, China's Economy: History, Trends, Challenges, and Implications for the World on 21st January 2019. Similarly, he also wrote several books, including The Map and the Territory 2.0, The Quotations of Chairman Greenspan, and so on.