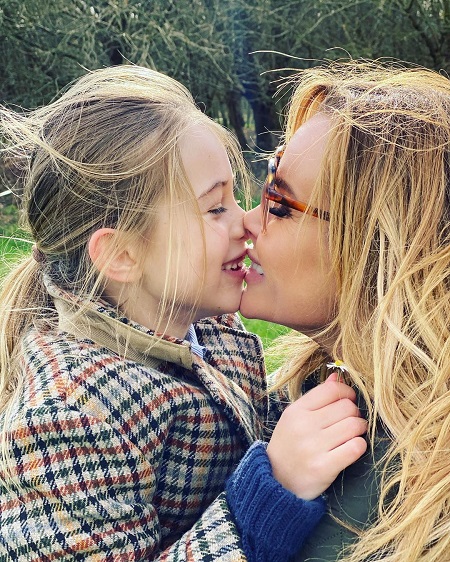 Alexa Louise Florence Hughes came to the limelight since her birth. Well, she is famous for being the firstborn child or eldest daughter of Hollywood superstars, Amanda Holden, and her second husband, Chris Hughes. Her mom, Amanda is a media personality, actress, TV presenter, singer, while her dad, Chris is a musician.

The celebrity daughter Alexa was born on Jan 21, 2006, in the United Kingdom. Further, she has one younger biological sister Hollie Rose Hughes, born on Jan 23, 2012. Her maternal grandparents are Judith Mary Harrison and Frank Holden. So far, she holds British citizenship and is of white ethnicity.

Alexa Louise, the 14-year-old celebrity daughter is still young at dating games at the current moment.  She is popular due to her wealthy parents among the fans who eager to learn about her personal life.

But sadly, Florence Hughes is still in her early days so there is no chance of having her own lover. So maybe in the near future, we will see her with her loved ones. Also, she is better doing at her school. In addition, she frequently makes TikTok with her mom and sister.

As of now, Alexa's mom, Holde (born on 16 February 1971) and dad, Hughes (born on 3 March 1954) are a happily wedded couple. They have been sparkling their conjual relationship for over 11 years and have been together for 16 years.

After meeting for the first time in 2003 in Los Angeles, they started dating openly as a supportive lover in 2004. After two years of love romance, they gave birth together to their first child Alexa Louise. Then they dedicated to getting married.

Finally, the record producer Chris and the television presenter married on 10 December 2008, after a five-year association. Their wedding took place at St Margaret’s Church in Somerset in then presence of their loved ones including Piers Morgan, Mick Hucknall, Angela Griffin, and EastEnders actress Jessie Wallace.

For their big day, the bride, Holden, 49, choose to wear a champagne-colored Elie Saab gown while the groom, Chris, 66, dressed a black causal suit. During the function, the couple's eldest daughter Alexa served as a flower girl while Formula One racing driver David Coulthard acted as best man. And Amanda’s one bridesmaid was the former The Bill actress Jane Wall.

Two years later of wedlock, Britain’s Got Talent judge had suffered from a miscarriage in 2010. But again sadly, their son Theo was stillborn in 2011 at seven months. In 2012, they gave birth to their second daughter Hollie in 2012 despite medical difficulties.

The co-host of the Heart Breakfast radio show, Amanda was once married to Les Dennis until 2003. He is a television presenter and comedian from Garston.

They first met in 1993  at the Hoste Arms while she was 22 and he was 40. Despite their age gap, they could not stop each other falling in love together. Two years later, they tied the knot on 4 June 1995 in a private ceremony.

But after marrying for nearly seven years, Holden and Dennis had officially divorced on 18 November 2003. Before this, they separated temporarily in 2000 after Amanda's affair with actor Neil Morrissey.

How Rich is Alexa Hughes?

Well, Florence Hughes just came into limelight as the superstar daughter. She has not started her professional career but she enjoys the luxurious lifestyle out of her parent's incomes.

Meanwhile, her mother, Amanda has a net worth of $6 million as of early 2020. She has acquired her wealth from her profession as an actress and presenter. Her acting credits are EastEnders, Kiss Me Kate, and Wild at Heart. The 5 ft 3 in tall Holden is now working as a judge on Britain's Got Talent.

Whereas, her dad, Chris also has earned a huge amount of money from his music production and songwriting work. Hughes is known as a drummer for Adam and the Ants from 1980 to1982.