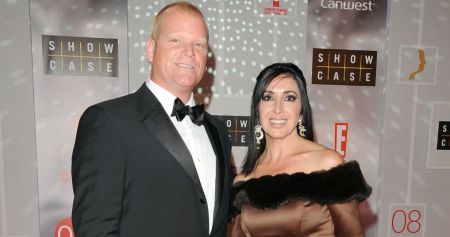 Canadian contractor, Mike Holmes felt that he was heartbroken after feeling the growing pains in his soul when he divorced his wife, Alexandra Lorex. But, he knew that his heart needs more time to believe the reality than what his mind actually knows.

The native of Halton Hills, Canada, Mike is one of the most popular TV stars. Other than that, what interesting things going in the personal life of Holmes? Find more exciting things about the Make It Right author, Holmes below.

The 56-year-old reality star, Mike met Anna Zappia in 2000. The duo then became lovers after enjoying their company for a while. They are currently dating but rarely is spotted by the paparazzi.

What's more to this? Well, the couple are currently busy focusing on their respected careers. But, they also spent quality time while going in exotic places and clicking pictures of the nature's beauty.

Viewer's Choice Award-winning contractor, Holmes met his ex-wife, Alexandra Lorex, when they both were teenagers. They also spent their childhood together for a short time before entering into their joyful relationship.

After dating for several years, the couple exchanged their wedding vows in 1982, where they greeted all of their families and friends as their guests. The bridegroom committed to a blissful marriage when Mike reached the age of 19, and Alexandra was still in her teenage years.

When all the things were going great with maintaining a good bond of relationship, the couple eventually separated due to Mike's bankruptcy in the 1990s. After staying married for more than a decade, they divorced by taking half-half custody of their three children, Sherry, Amanda and Mike Holmes, Jr.

Do You Know Holmes's Children are Reality TV Stars?

Mike's grown-up kids, Sherry Holmes, Amanda Holmes, and Mike Holmes, Jr. are one of the popular reality TV personalities. Three of his children made their debut appearance in the reality television series, Holmes on Homes in 2005.

Since then, Holmes's kids are starring in the Holmes on Homes TV sequels, including Homes Inspection and Holmes Makes It Right. On the set, his older daughter, Amanda serves as a merchandising manager, while his kids are in the art department.

His Two Kids are Married & One Child's Relationship is still a Mystery...

Mike's beloved son, Mike is married to his love partner, Lisa Grant on 14th August 2017 in the Blue Mountain region of Ontario. At their nuptial, they invited their close family and friends, including their HGT Canada cast members.

On the other hand, Holmes' second child, Sherry is committed to a cherish-able relationship with her marital partner, who's identity is still a secret to their fans. She and her husband also completed their 1st marriage anniversary on 12th December 2019, while celebrating six years of relationship, and welcoming one daughter, Cali.

Despite Lorex's two children's marriage, his eldest daughter, Amanda is still hiding her relationship status to her fans. Maybe one day, she will also come out with her loving partner. But, she might be single as of now.

Many people are questioning whether the American consultant, Lorex is married again or she is single? Nonetheless, Alexandra proclaimed that she is far away from getting married for the second time and lives a life as a single woman.

Mike's ex-wife, Alexandra is currently focusing on her upcoming projects while pursuing her career in the right path. She aims to achieve her goals as a prominent business person, which might be one of the reasons why she isn't linked to relationship up until now.