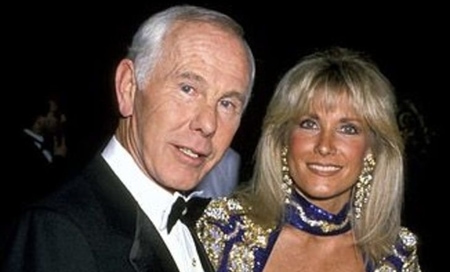 When it comes to the late-night talk show host, Johnny Carson is at the top of it. Even the veterans like David Letterman adores Johnny of his talent; however, in 2005, Johnny passed away because of his illness.

At the time of his death, he was in a marital relationship with Alexis Maas. Alexis is Johnny's fourth wife, and the marriage with her lasted until his last breath. Want to know more about her married life with Carson? If yes, then read along.

Have you ever wondered how you might meet people in random places? Sometimes such random strangers form an inseparable bond, finally tying the knot with each other. Such is the case of Alexis and Johnny.

The couple first locked eyes with each other in 1985 on Beach. The representative of the late comedian said the pair tied the knot in a secret ceremony in front of loved ones. The Wedding ceremony was held on June 30, 1987, on Carson's Malibu beach home.

At the ceremony, Judge William Hogaboom pronounced the pair husband and wife. At the wedding, Carson's brother Dick Carson stood as the best man. The couple traveled to England after the wedding on honeymoon without letting anyone know about it.

Who was Alexis Maas before Marrying Johnny?

Before walking down the aisle with the famous talk show host, Alexis worked as the stock brokerage employee. She left the job, and there are no reports of her working after that as Maas likes to keep her personal life private.

Except for her previous work, there are no details about Alexis before marrying the famous comedian. She received a lot of fame after the marriage, just like Andrew Neil's wife, Susan Nilsson.

Carson lost his Son Rick in an Accident

From his first marriage to Jody Morrill Wolcott, Johnny welcomed three sons in his life. Other than that, he does not have any more children. From his marital life with Alexis, the couple did not welcome any children.

He tied the knot with Jody in 1949, but could not sustain their wedding as they split in 1963. Jody gave birth to three sons, Christopher Carson, Corey Carson, and Richard Carson. Richard A.K.A. Rick, however, lost his life on June 21, 1991, after meeting with a freak accident.

As reported by the People, Jody was not present at Rick's funeral and only received the news after the burial. According to Johnny, Jody traveled a lot because of which it became difficult to contact her.

Alexis and Johnny Past Relationships

Maas is a reserved person, so; there are no details about her past relationship. She might've been in quite a few relationship in the past, but her marriage with Johnny is her first one.

On the other hand, Johnny was married four times in the past. He first tied the knot with Jody Wolcott, but after the divorce, Johnny exchanged wedding vows with model Joanne Copeland on August 17, 1963. This marital affair also could not sustain as the pair parted their ways in 1972. As part of the divorce settlement, Johnny paid $6,000 per month until his death to Joanne.

Joanne also passed away in 2015, at the age of 83. Johnny's third marriage was with Joanna Holland. On September 30, 1972, he and Joanna tied the knot but citing to irreconcilable differences, and Holland filed for divorce on March 8, 1983. As part of the divorce settlement, Holland received $20 million in cash and property.

After three failed marriages, Johnny finally settled down with Alexis in 1987. The famous talk show host got a happy marriage, which he always sought, as the relationship lasted for eighteen years.

On January 23, 2005, Carson's soul left his body at Cedars-Sinai Medical Center in Los Angeles. According to sources, the respiratory failure caused by emphysema became the primary factor for his death. After his death, many celebrities paid tribute to him, remembering all the good things that he did in his life.

Throughout his life, Johnny donated millions of dollars in support of children, education, and health services. He also left $156 million to the John W. Carson foundation upon his death. Alexis went under the radar, and there is no news about the wife of the King of Late Night.