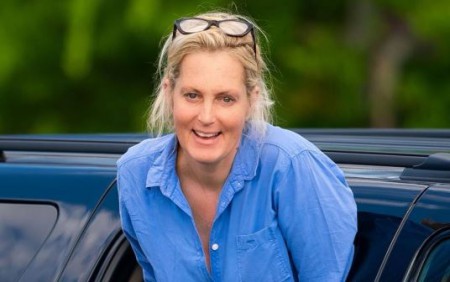 Who is Ali Wentworth?

Today we are going to talk about a couple who are famous for their happy on-going relationship. We are talking about the celebrity couple, Ali Wentworth and her spouse George Stephanopoulos. So, who are they? The 54-year-old, Ali Wentworth is an American actress, comedian, author, and producer. Meanwhile, George is an American tv host, political commentator, and former Democratic adviser.

From her career, Ali has amassed a giant net worth and earns a colossal amount of salary. With her husband, Ali has two children and they are relishing their relationship. So, let's know in full detail about Wentworth.

Ali Wentworth was born as Alexandra Elliott Wentworth on January 12, 1965, in Washington, DC, USA to parents Muffie Cabot (mother) and Eric Wentworth (father). Her mother was White House Social Secretary while her father was a reporter for The Washington Post. As of 2019, Ali is 54 years old and her birth sign is Capricorn.

Talking about her education, Wentworth attended the Dana Hall School for Girls in Wellesley, Massachusetts and graduated from Bard College in New York.

Ali debuted as a cast member on the Fox sketch comedy series In Living Color. On the show she became famous for her impressions of several characters like Amy Fisher, Hillary Clinton, Brooke Shields, and many more.

Ali has appeared in The Tonight Show with Jay Leno and The Oprah Winfrey Show. her most notable film appearances include Jerry Maguire, Office Space, and It's Complicated. She also hosted Daily Shot, a short daily talk show segment on Yahoo! Shine.

As an author, Ali has written four books till date including The WASP Cookbook, Ali in Wonderland: And Other Tall Tales. Similarly, her work as a producer include the 2007 Head Case.  In 1995, she played Jerry Seinfeld's girlfriend, Sheila in the memorable "Soup Nazi" episode of Seinfeld.

Talking about Wentworth's personal life, she is a married woman. She is married to the chief anchor and ABC News correspondent, George Stephanopoulos. The couple first met on a blind date in April 2001. Just two months later, Ali and George were engaged. The couple married on November 20, 2001.

Their wedding ceremony was held at the Archdiocesan Cathedral of the Holy Trinity on New York City's Upper East Side. They welcomed their first daughter Elliott Anastasia Stephanopoulos on September 9, 2002 and Harper Andrea Stephanopoulos on June 2, 2005.

As of 2019, Ali and her husband, George have been married for nearly eighteen years and they currently resides in Manhattan. In her book Go Ask Ali, she revealed that even after 17 years of marriage, the couple enjoys quite a healthy sex life. Well, we now know how much they love each other.

Net Worth of Ali Wentworth

The multi-talented Ali Wentworth has a net worth of $6 million as of 2019. Throughout her career as an actress, comedian, and producer, Ali has amassed a stupendous fortune. The exact amount of Wentworth's salary is not available, but she might earn nearly a million dollars. Some of the actress who have similar kind of net worth are Nicola Correia-Damude and Paulina Gerzon.

As an actress, Ali has appeared in several movies which has collected impressive collections at the Box-Office. For example, the movie 1996 movie Jerry Maguire collected $273.6 million at the Box-office. Similarly, the 2009 film It's Complicated collected $219.1 million. Further, Ali earns an additional income from her career as an author and producer.

Meanwhile, Ali's husband, George Stephanopoulos has a staggering net worth of $40 million as of 2019. What is his salary as a co-host on Good Morning America? As per reports, George earns a hefty salary of $15 million.

Talking about the couple's properties, they sold their Southampton house in New York for $5.995 million in 2019. The 4,800 square foot estate included 5 bedrooms and 7  bathrooms.