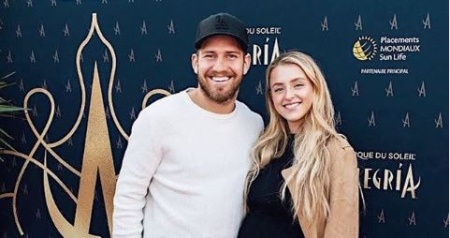 After her break-up with Alex L'Abbee, 21-year-old Alicia Moffet has found love in Alex again. This time, it's a different Alex, a former ice Hockey player Alexandre Carvalho-Mentink is the one who stole the Canadian singers' heart.

After announcing her lover via her social media, her popularity skyrocketed with more than 1,000 unique followers. Moffet became a rising star in the Canadian music industry like Emm Gryner, Jenna Walker, and many more. Scrolling through their Instagram, we know that the pair met each other sometime in August 2018. So' are you curious to know more about their relationship and a newborn baby? Then read along.

The Charm of New Love...

Alicia wanted to take some time off after her break-up with Alex L'Abbee but when the right guy comes along you can't resist, can you? Something similar happened to Moffet as she fell in love again.

Alexandre Mentink, a former Canadian Ice Hockey Player swept her heart away with his charm and good personality. Neither Alicia nor Alexandre confirmed the exact date of the beginning of their romance but scrolling through their Instagram, we know that the couple probably started seeing each other since August 2018.

In the picture, the pair is seen spending quality time at a concert in Osheaga. It's been a year now, but with the arrival of their new child together it looks like the duo is head over heels in love. Prior to his relationship with Moffet, Alexandre was in an on and off relationship with a mysterious woman.

In 2019, Moffet announced her pregnancy via her social media profiles. After the announcement on a regular basis, the Canadian singer posted her progress with the unborn child. In February 2019, Moffet shared the gender of her first child who was yet to be born.

Together with her partner Alex, she became a mom to a lovely daughter which the couple named Billie Lou Mentink. The new mom is very happy with her first child and often shares pics via her Instagram.

For the wonderful name of their daughter, the couple started their search on Google. But the origin name for Lou comes from Alex's grandmother Louise. The name of Billie, however, came after some conversation with Moffets' Parents.

Recently, Moffet traveled to Greece with her daughter and partner. She shared a picture of them together on the island of Mykonos watching a sunset. The visit to Greece, however, was to attend Alex's sister wedding.

The 6 foot 1-inch Hockey player is very fond of fitness. He has a very muscular body and with a perfect body and a good skill, in 2013, Mentink played Hockey for the Wranglers.

But pretty soon he left the team and in 2015, he established his vision to make a green Canada with his construction company. He started working as the President of Mentink General Contractor Inc. His reign at the company is considered a success because of all the achievements the company found in the field of construction.

After 2018, the company shared a new vision to work on conserving electricity and protecting the environment. They began specializing in solar panels and heavily promoted in the region of Quebec. As part of growing the local commerce, Alex collaborated with the Montreal Company called Kusteez to make sweaters and caps.