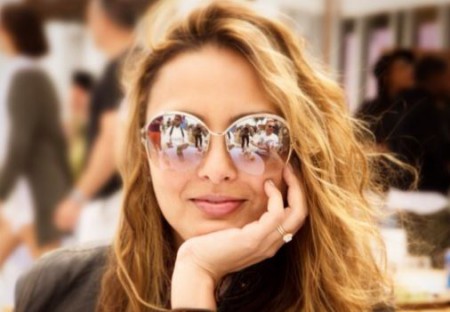 We have seen many celebrity spouses getting constant attention and fame. And Allegra Riggio is one of them who is famous for her marital relation with the Primetime Emmy Award-nominated Irish-British actor, Jared Harris. In this article, we will know all the precise information about Allegra Riggio and her personal life.

Who is Allegra Riggio?

Allegra Riggio is an American, on-air personality for both Television and Radio. Throughout the 1990s, she became part of national advertising campaigns and was featured in local fashion shows.

During her teens, Allegra enjoyed becoming a Miami celebrity. She graced the shot-on-site pages of every local magazine and newspaper. Additionally, she was featured as one of Ocean Drive's "Hottest Locals," and a modeling cameo in Cocaine Cowboys proclaimed her the face of the renaissance of South Beach.

Allegra Riggio was born on June 1, 1975, in New York. As of 2019, she is 44 years old, and her birth sign is Gemini. She grew up in New York, Sao Paulo and South Florida. Likewise, her heritage is Indian/Italian/Polish.

A career as a model and Host

The beautiful Riggio became a highly sought-after nightclub lighting director, and since 1998, she has been a favorite of world's many famous DJs. She has been featured on mun2, HDNet, Nikki TV, the Alternative Oscars, and hosted a documentary called "Underground Miami."

In 2010, Allegra split her time between Los Angeles, Miami, and New York. She also hosted for various outlets including Sirius XM Radio and dance TV, The Rock & Roll Report. Also, she appeared as a model on Miami.com and mota.com.

Besides, modeling, Allegra has written many webisode series which combine her background in electronic dance music with her new career in comedy, television, and film.

The stunning woman, Miss Allegra Riggio, is married. She has been married to her longtime boyfriend-turned husband, Jared Harris since 2013. Their relationship began in November 2009. Similarly, after a five-month-long engagement, the couple happily married each other.

The Mad Men actor proposed to Riggio in June 2013, with a custom-made ring which featured a heart-shaped diamond in a rose gold setting. And after five months, they married each other on  November 9, 2013.

Their wedding ceremony was held at Miami Beach on the Lady Windridge yacht in the presence of friends and families. Allegra, as a bride, revealed that she felt like a fairy princess as she was wearing angel wings attached to her strapless lace gown. At the moment, they don't share a child.

Allegra Riggio and Jared Harris: Match made for each other

Jared and Allegra first met at a comedy show at Bar Lubitsch in April 2009. During that time, Harris had just gone through his final divorce, while Riggio was in a relationship which she later left in August 2009.

Both Harris and Riggio were miserable at that time, and they found each other to suppress their pain. Later, Allegra and Jared started planning fun outings to cheer up. They went to comedy shows, concerts and sang in Karaoke together.

Inside their pain, the couple found a new joy, a purpose which made them fall in love. Afterward, they decided to let go off their past relationship and after four years became each other spouses.

Jared Harris has been married twice

As of 2019, the beautiful lighting director and TV host, Allegra Riggio has a net worth of $500,000. The 44-year-old, brunette beauty also worked as a model and has appeared in many magazine covers in the past. For your information, model-turned-actress, Sunshine Deia Tutt also has a similar net worth.

Meanwhile, Riggio also enjoys the net worth of her spouse. As of 2019, Jared Harris has a net worth of $8 million. Most of his movies have collected excellent revenue at the Box-Office. Similarly, in 2019 Harris received critical acclaim for his role on the HBO miniseries Chernobyl.