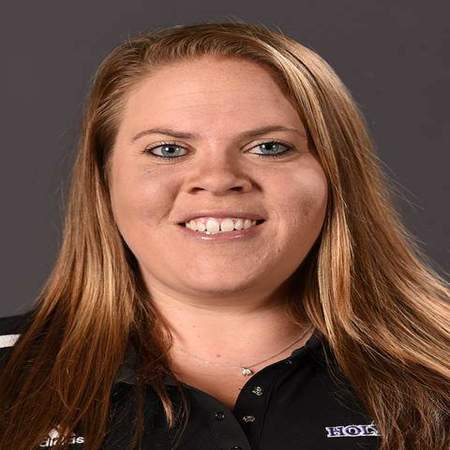 Amanda Belichick is an American lacrosse coach and celebrity daughter. Moreover, she currently serves as the head coach of the women's lacrosse program at 'Holy Cross' in Worcester, Massachusetts. Besides, Amanda is famous for being the daughter of an American professional football coach of the NFL, Bill Belichick.

Back in 2018, Belichick also helped the 'Holy Cross Crusaders' reach their first playoffs since 2015 in the 'Patriot League'. Apart, Amanda is a happily married woman and living a happy married. Does she have children? Let us know more about her in the article written below.

Who did Amanda Belichick marry? Do they share children?

As said above, Amanda is a married woman. She married her long time boyfriend turned husband A. J. DeSantis. Moreover, the couple met for the first through social media and later fell in love with each other. Apart, they dated for some time before getting engaged with each other.

Finally, after two years of engagement, the love birds walked down to aisle on July 8, 2017. The wedding took place in the presence of family and close friends in Weekapaug Inn in Westerly, Rhode Island. Furthermore, Amanda wore a beautiful lace-white gown and the groom wore a blue-white suit on their big day.

Since then Amanda and A. J. is living a happy married life. There is no sign of their separation or divorce yet. Nevertheless, we don't have news of her pregnancy or children yet. As of now, she is just enjoying her happy married life with her husband in the United States of America.

Amanda Bellichick has earned a decent amount of money from her career. Moreover, she has an estimated net worth of $500,000 which is similar to Lily Newmark and Olivia Nikkanen. But, her exact net worth figure is yet under review. As per the report, the average salary of a lacrosse coach ranges from $51,328 per year.

On the other hand, her father's Bill Belichick has earned a hefty amount of money from his career as a professional coach NFL. According to Celebrity Net Worth, Bill's estimated net worth is around $60 million along with a salary of $12 million. As of now, Amanda is living a healthy and wealthy life with her husband and family members.

Amanda Belichick was born in 1984, in Weston, Massachusetts, USA. Moreover, she is the daughter of an American professional coach for the NFL at New England Patriots, Bill Belichick, and her mother's name is Debby Clarke Belichick. Furthermore, she grew up with her two brothers; Stephen Belichick and Brian Belichick. Similarly, she holds an American nationality and belongs to white ethnicity.

Talking about her education, she completed her bachelor from Wesleyan University where he played lacrosse. After completing her bachelor's degree in 2007, she started working in the admissions department of a boarding school called 'Choate Rosemary Hall' and later at the University of Massachusetts Amherst.