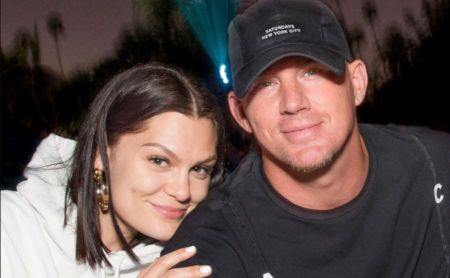 Magic Mike actor, Channing Tatum got united again into a romantic relationship with his former girlfriend, Jessie J, an English singer on Saturday, 25th January 2020. Over the reconciliation, Tatum posted a picture wearing unicorn hats with a golden horn while Jessie kisses him on his lower chin via Instagram.

On the same day, January 25th, Channing also shared a picture of his beloved partner, Jessie on the black and white color theme while she was wearing a one-piece dress. In the Instagram post, he wrote, "The Sculpture of Magic," that means a three-dimensional shadow art.

Recently, Channing and former The UK Voice coach, Jessie went out for a date in Los Angeles, California. During the time, he was wearing a black slim-fit tuxedo with a white shirt from inside. On the other hand, Jessica wore a green v-neck backless slip velvet dress.

More to this, Jessie posted an Instagram video, where Tatum kisses and bites her cheek while showing love. Meanwhile, the video has no sound, while the two showing affection to each other. In the Instagram post, Jessie wrote the whispers, noise, and comparisons are muted to turn on Tatum's life volume up to the blast.

The 31-year-old singer, Jessie wrote, "When you surrender and fearlessly act on the truth that always was." She also wrote love would glow and grows differently. She then tagged Tatum on her post, saying, "I Love You So Much, Baby." Lastly, she showed her compassion to Channing,

The love birds had their first interaction at the MTV Movie Awards, where Jessie and Mark Wahlberg came up to present the Best Comedy Performance to the Logan Lucky actor, Tatum. The award ceremony was held on 12th April 2015 in Los Angeles, California.

Following after few months, the duo spotted at the Domino center in Seattle during Jessie's live music concert. As per sources, they were also seen playing golf at a local course in Seattle, Washington on 6th October 2015. They even spotted at Jessie's show in Salt Lake City, Utah on 8th October 2015.

After Channing's separation with former wife, Jenna Dewan on 2nd April 2018, he and Jessie started dating. However, they split up amicably in November 2018 due to some reasons. But now, the couple is happy to be in their relationship since they split up. Similarly, Odell Beckham Jr. and Lauren Wood are also in a good relationship.

If You're Passionate In Reading Celebrities' News - Visit Married Celeb!!!