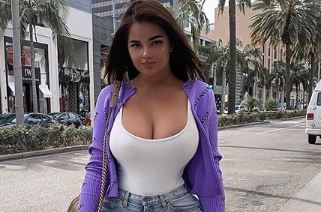 Anastasiya Kvitko is a famous Russian glamour model. She is an entrepreneur who is also a Instagram sensation just like Jem Wolfie. Fashion Diva Anastasia got everyone's attention after she was named Russian Kim Kardashian back in 2013. Besides her modeling career she also appeared in several music videos with Pitbull.

Born on January 23, 1996, under the sign of the zodiac Aquarius. Moscow is her hometown where she grew up with her younger sister Nastya. Her father's name father is Grigory Reshetov who used to be a soldier for the Soviet Union. So, as of now, is she dating anyone? To know about her relationship status, read the article.

Who is The Boyfriend of Anastasia?

The Instagram model Kvitko is having a relationship with the Russian millionaire Arseny Sharov. She first met Arseny in Los Angeles who is a renowned businessman.

According to the source they started to date each other a year ago. In addition, they seem to remain quite about their relationship in public, therefore it's hard to give more details about their affairs. The paparazzi spotted them at a hotel where they were spending quality time together.

The gorgeous Kavitko used to have a relationship with the famous Russian rapper Timati. Timati and Anastasia had an affair when they used to live in Moscow. Their relation was out of the spotlight for a long time but after Anastasia gained success, everyone starts to dig deep into her personal life.

So, we can tell you that, their break up, made her to move to Miami where Anastasia initiated her modeling career professionally.

However, it's hard to figure out why these couple split. Evidently, both of them never speak about their love life. Both of them are at the top of their career and it seems like both of them have moved on from their past.

The young Instagram sensation has earned good amount of fortune and fame through her career. Her estimated net worth is $550,000 as per 2020.

Likewise another Instagram model Lyna Perezas earns a similar amount of money. Anastasia's most of her earnings comes from her modeling profession. As per reports, followers with 1 million earns around $10,000 per post and above that can make upto $100,000 to $250,000 per post.

Moreover, She promotes several brands like corsets and swimming suits where she must gain thousand of dollars. She also performs a few shows at night clubs where she must have gained good portion of the money.

It's not unusual for the model or actress to have surgery these days. Similar, Kvitko also went through several surgeries in order to grow her bumps and breast. She has done surgery while staying in Russia and evidently, she got recognition after her surgery.

Interestingly, when she used to work model company based in Miami she asked to lose her weight but instead of losing weight she moved to Los Angeles to give her career new spark.