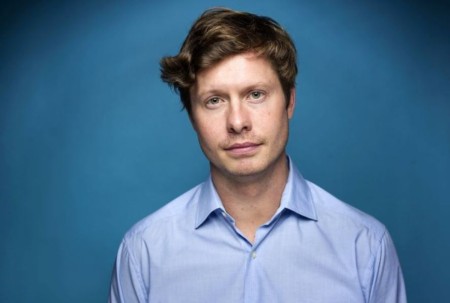 American comedian, Anders Holm is well known for his amazing humor and comedy timing that makes everyone laugh. He is also one of the multi-talented artists who created a sitcom, Workaholics, along with Blake Anderson, Kyle Newacheck, and Adam Devine, among others. For his notable work in the show, The One 'N Done, he received an Outstanding Achievement Award for best comedy.

Holm was born on 29th May 1981 in Evanston, Illinois, United States, and holds an American nationality. Born to American parents, he belongs to mixed ethnicity (Swedish, Norwegian, English, and Swiss-German). Apart from this, he is a married man.

Anders is enjoying his blissful married life with his wife, Emma Nesper Hold, an actor. The duo said, 'I dos' in an intimate ceremony held on September 2011.

Two years after their marriage, they share a lovely son on 19th December 2013. As of now, their baby boy is five-year-old.

Well, the couple had their first encounter in the Evanston Township High School when they both were only 12-year-old. At the first impression, Holm noticed Emma was wearing white shorts at cosmic bowling located in Evanston, Illinois. He then started talking to her for months and later began to fall for each other.

The laughter king, Holm, maintains a total fortune of $6 Million as of 2019. He also makes a subsequent income from his profession. According to PayScale, a professional comedian makes an annual compensation of $39,000 in the United States.

Anders further starred in the role of Anders Holmvik in the television comedy series, Workaholics, which was rated 8.1 IMDB. Similarly, he collaborated with Zack Pearlman and Maribeth Monroe in the series.

Anders Holm has also produced several hit movies that received good/positive reviews by the film critics. His debut film, Neighbors, collected $150,157,400 domestically and $120,507,734 in other countries worldwide total of $270,665,134 with a production budget of $18 Million.

Check out the trailer of Neighbors

Holm's second highest-gross movie, The Intern, moreover, received 51 out of 100 by 36 critics and 5.8 out of 10 by Rotten Tomatoes. It also earned $75.7 Million in the US and Canada and $118.8 Million in other countrysides for $194.6 million against the budget of $35 Million. Similarly, his other successful films are Top Five, How to Be Single, and many more.

Rose To Fame As A Comedian

The humorous comedian, Holm, started his career from a made-for-television movie, Mail Order Comedy, where he worked under the direction of Kyle Newacheck in 2006. He then starred as Bruce Romaine in the short action-comedy series, Crossbows & Mustaches from 2006 to 2008.

Anders additionally made his appearance in the television sitcom, Traffic Light, where he played the role of Howard in 2011. He further appeared as Casey Peerson in the romantic comedy series, The Mindy Project with Kristian Kordula and Lauren Cook from 2013 to 2017. He also guests appeared in many TV shows, including Champions, Unbreakable Kimmy Schmidt.