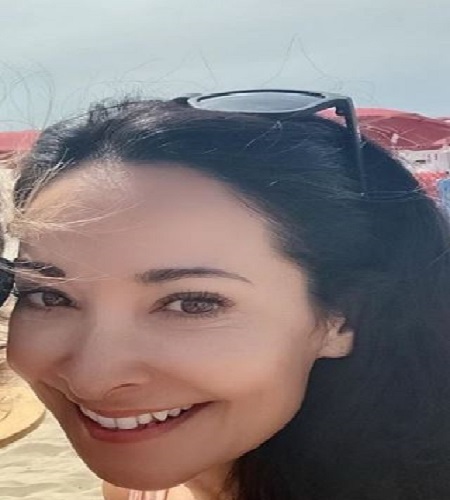 The beautiful Angela Nazario is not involved in the media world neither she knows the glamour industry. However, she has made headlines because of her relationships with well-known personalities.

Well, Angela is famously identified for being the ex-girlfriend of National Football League (NFL) player, Larry Fitzgerald and baseball catcher Mike Piazza. She was born on September 18 1970, in Flagstaff, Arizona. But her family background information is not available.

So, let's take a glimpse of her personal life in the following sections.

After ending an intimate relationship with two players, Angela is living a joyful single life without any problems. But at the present time, she has not mentioned anything regarding her dating affairs.

If we scroll her Instagram account, the beautiful lady Nazario is seen enjoying her free time with family and friends. Mostly, she shares various pictures of exotic places with her handsome son.

Therefore, she is enjoying her life as a single mother. Also, she is working hard to raise his son rather than dating boyfriend.

Before remaining as a single lady, Angela had hooked up for two times. Firstly, she began dating with Professional baseball catcher, Mike Piazza (born on September 4, 1968). He played for MLB for 16 seasons from 1992 until 2007.

But sadly the ex pair used to keep most of their private details under the wraps. So there is no much information regarding their love history but it is assumed they were together for one year only.

That means Angela and Mike had dated from 1999 to 2000. Currently, Piazza is happily married to wife Alicia Rickter since 2005 whom she shares child, Paulina and Nicoletta Piazza.

Shares One Son With Ex-Larry Fitzgerald

Previously, Nazario was also involved in a happy relationship with All-American honours footballer, Larry Fitzgerald. The two had their first encounter in 2006 and began dating shortly after a while.

While the duo was dating, some people criticized their age-gap, which was 13 years of differences. But, the couple didn't stop to share their company and carried their relationship happily. They then welcomed a baby boy, Devin Fitzgerald.

After the breakup, Fitzgerald started dating an ex-girlfriend, Melissa Blakesley. They share one child named Apollo Fitzgerald, born on 23 April 2013.

During Larry's 2008 season of NFL, Angela accused him of domestic violence. And she filed for an order of protection against him.

TMZ stated on New Year’s Eve 2008 Fitzgerald had been ordered not to visit Angela. Following that, the couple separated by signing an agreement for their child support.

Net Worth and Earnings of Angela Nazario

As of now, Angela Nazario's actual profession is yet to revealed to the media. So her net worth is still under investigation. However, she came to limelight just because of her relationship.

Her ex lover, Larry has an impressive net worth of $50 million as of 2020. Moreover, she was also in a relationship with a former baseball player, Mike Piazza who has an estimated net worth over $70 million. He has ultimately earned this amount throughout his NFL career.

Fitzgerald further is assumed to be earn $11 million per year from Arizona Cardinals team. Throughout his entire career, he has earned more than $169 million in salary alone.

Moreover, Nazario's another ex another half Mike Piazza's worth stands at $70 million which he has accumulated from his baseball gigs. During his career, he made $120 million in total. Also, he has received thousand millions dollars from endorsements.