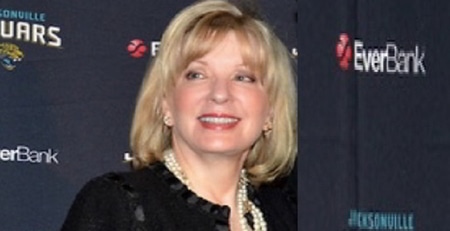 One of the renowned celebrity wives, Ann Carlson Khan, is the wife of a prominent billionaire businessman named Shahid Khan. He is the CEO and owner of Flex-N-Gate, an automobile OEM manufacturer. Stepping from the shadow from her billionaire spouse, she is an American social worker, dancer, and choreographer by profession.

Ann was born on 21 October 1954, in Park Ridge, Illinois, the USA. Likewise, she was born under the sun sign, Libra. She belongs to the white ethnic background and holds an American nationality. Read the article until the end and know more about her marriage and personal details.

Ann is currently in a happy marital relationship with a Pakistani billionaire, Shahid Khan, aka Shad Khan. He is also the owner of the Jacksonville Jaguars of the NFL, Fulham F.C. The two tied the knot in 1977 in a private ceremony with the presence of their close friends and relatives.

The pair first met in 1967 while attending the University of Illinois. Ann and Shahid dated for about ten years before taking their relationship to the next level. It has been 43 years of their successful marriage, and they are sharing a great bond. So far, the couple is not part of any divorce rumors and controversies regarding their love life.

Shares Two Children With Each Other

The couple also shares two children from their marital relationship. The two welcomed their first child, a son named Tony Khan, born on 10 October 1982 and currently 37 years old. Also, he is a prominent American businessman and American football and association football executive.

Furthermore, Ann gave birth to their second child, a daughter named Shanna Noelle Khan. As of now, she is a married woman as she tied the knot with her long-time boyfriend, Justin McCabe, in April 2015.

As A Wife Of A Billionaire

Not to mention, she is one of the popular billionaire wives and must be living a lavish lifestyle and enjoying all the things that this world could give.

He bought this company for $66,000 from his former employer Charles Gleason Butzow. Initially, it supplied bumpers for Toyota pickups. Later in 1989, it became the sole supplier for the Toyota line in the USA. After adopting with Toyota, the sale volume of Flex went from $17 Million to $2 Billion in 2010.

How Much Is The Net Worth Of Ann Carlson Khan?

Ann's net worth is estimated at around $1 Million as of 2020, which is close to an American ballet dancer, Mary Helen Bowers. From her exciting career as a dancer and performance artist, Carlson might've earned a decent income.

As a choreographer, She won many awards and accolades. Her work is featured in top cities around the world. She furthermore, collaborated with Mary Ellen Storm from 1990 to 2010 on several videos. According to online sources, her yearly earning might be around $76,000.

On the other hand, her partner, Shahid's fortune, is around $8.3 Billion as of 2020. The wealth makes him 61st the richest man in the world and placed him among other billionaires such as Lee Seo-Hyun. Additionally, he also owns a $200 million yachts and four private jets.

As per Daily Mail, the Pakistani Billionaire wants to buy Wembley Stadium. Surely, Ann is living a lavish lifestyle along with his children and husband in a $2.5 million astonishing property in the USA.

Stay Updated With Married Celeb for more Biographies and Gossips on Celebrity Wives!!!