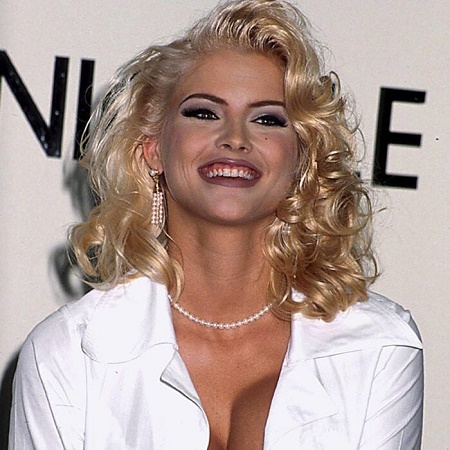 Anna Nicole Smith was an American model, TV personality and actress who gained immense popularity for working Playboy magazine as Vickie Smith. She even received the title of 1993 Playmate of the Year for the magazine.

Further to that, she has done modelling for fashion famous magazines such as H&M, Guess, Lane Bryant, and Heatherette. Know more about her personal life in the following sections.

Was Married For Two Times

Smith had been in a marital relationship throughout her entire life. She first tied the wedding knot with Billy Wayne Smith, a cook at the restaurant on April 4, 1985. She was just 17.

They first met in Mexia at Jim's Krispy Fried Chicken. Together, they had one son Daniel Wayne Smith born on January 22, 1986. But after a year, they had divorced on February 3, 1993, in Houston. Then she met 86-year old petroleum tycoon J. Howard Marshall in October 1991 while performing at a Houston strip club.

During their two-year love romance, J. Howard used to give lavished expensive gifts on her and asked her to marry him. Then finally they exchanged the vows on June 27, 1994, in a private ceremony. At the time, she was 26 and he was 89.

Their marriage led to speculation that Anna got hitched to him for his fortune. She maintained, however, that she loved him and that age did not matter to her. Unfortunately, Marshall died at the age of 90. in Houston on August 4, 1995. For thirteen months, they were together.

Was Devastated Over her Son Daniel's Death in 2006

Well, in her life, Nicole had experienced a bad tragedy. When she was admitted to a hospital in Nassau after giving birth to her daughter, Dannielynn, she lost her twenty-year-old son, Daniel Smith. While visiting her, he was found dead on September 10, 2006, due to a drug overdose including methadone and antidepressants.

He was buried at Lake View Cemetery in New Providence on October 19, 2006, almost six weeks after his death. Because of her son accidentally death, she never truly recovered from the loss. "From the time I met her, everything was for Daniel", she said.

Anna Nicole announced that she got pregnant on June 1, 2006, through her official website saying "Yes, I am pregnant. I'm happy, I'm very, very happy about it'. Finally, her daughter Dannielynn Hope Marshall Stern was born on September 7, 2006, in New Providence, The Bahamas. She has established herself as a reality TV personality and model.

The baby's father was none other than Smith's longtime personal attorney, Howard K. Stern, 51. They had been in a love relationship for a long time. Later they exchanged rings and vows in an informal commitment ceremony on September 28, 2006. Their special day took place in Margaritaville, a 41-foot (12 m) catamaran off the coast of the Bahamas.

Their certificate of marriage had not been given and the ceremony was not legally enforceable. Their ceremony pictures were sold for around $1 million to People magazine through Getty Images.

Net Worth Of Smith

At the time of her death, Anna had $1 million net worth which she had earned from her career as a model, actress and TV personality. She became famous after being named the 1993's Playmate of the Year.

On the other hand, her late husband, J. Howard had a value of $1.6 billion thankful to his 16% ownership stake in Koch Industries. After his death, she was initially given $475 million but that was soon abandoned. After the lengthy legal battle in the Supreme Court with Marshall's son Pierce Marshall, Anna didn't receive anything from her former husband's property.

As per her education, she studied at Durkee Elementary School and Aldine High School in Houston. But later she went to study Mexia High School where she dropped out of school during her sophomore year.

Anna was found dead in her hotel room 607 at the Seminole Hard Rock Hotel and Casino in Hollywood, Florida, on February 8, 2007. 2:10 p.m. (EST), she was taken to the local hospital named Memorial Regional Hospital, where she was pronounced dead at 2:49 p.m.

After a seven-week investigation, she was found to have died of combined drug overdose with chloral hydrate sleeping pills. She had Benadryl taken, too. In her system, no illegal drugs were identified. On March 2, 2007, her funeral took place.