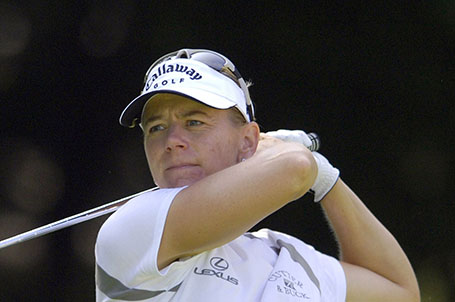 Former Swedish golfer Annika Sorenstam is one of the best female golfers in history. She officially ended her professional career back in 2008. She is the recipient of the 2003 World Golf Hall of Fame, LPGA Tour Rookie of the Year, LPGA Vare Trophy and Ladies European Tour Player of the Year.

Annika was born on 9 October 1970 in Bro which is located in Stockholm County. Her father Tom Sorenstam is a former IBM executive whereas her mom Gunella Sorenstam worked in a bank. Annika has a sister named Charlotta Sorenstam who is also a professional golfer and works as a golf coach at her academy. Golf champion Annika is also a mother of two kids.

Annika and her ex-husband David Esch first met on a driving range in 1994 at Moon Valley Club, Phoenix, Arizona. At that time, she was an LPGA rookie practicing for a tournament and David worked for the club manufacturer Ping. About their first meeting, David wrote:

Looking back, it's hard to believe how naive we were. Our relationship has always been a learning experience, but it was the 1995 U.S. Open that truly changed our lives.

The duo was engaged a year later at the 1995 Evian Masters championship. Three years later on January 4, 1997, Annika and David were pronounced as husband and wife in Lake Tahoe. Unlike Annika, Amy Mickelson is famous due to her golfer husband.

While Annika was chasing her career, David became her supporter. For his role in the marriage, many joked that he had become Annika's wife. But David was never ashamed of assisting Annika. He helped with her travel arrangements, handled correspondences and took care of countless details. Although David did all the household chores, it was Annika who led the couple to travel the world.

Annika and David didn't have any kids and their marital life never existed for more than eight years. Their divorce was settled n August 22, 2005.

It was a struggle for Annika to move after her divorce with David. Eventually, she began dating Mike McGee, International Golf Partners' agent. In an interview with Golf Today magazine, she said;

I am still struggling to move on. You can't get over a divorce in just a few months. But being with Mike makes it a little easier. He helps me move on.

Annika and Mike got engaged in August 2007. Annika let all the people know about her relationship with Mike. The pair's wedding was held on January 10, 2009, at Lake Nona Golf & Country Club in Orlando, Florida.

On September 1, 2009, Annika and Mike welcomed their first child Ava Madelyn McGee. Annika had announced that they were expecting her in her blogs. She also wrote of her eagerness to start a business and a family. Her second child of nine weeks premature William Nicholas McGee was born on March 21, 2011.

What is Annika's Net Worth?

Annika owns a net worth of more than $30 million. She won $1 million during each of her LPGA tournaments. In 2003 Skins Game, Annika received the second award which was worth $225,000.

During her LPGA career, she was the first player to have earned $15 million. Similarly, she had won 2006 Stanford International Pro-Am and amassed over $1 million. She is currently working as a golf entrepreneur and owns her golf institute ANNIKA Academy at Ginn Reunion Resort in Reunion, Florida. Annika and her husband run the business under her brand name ANNIKA.