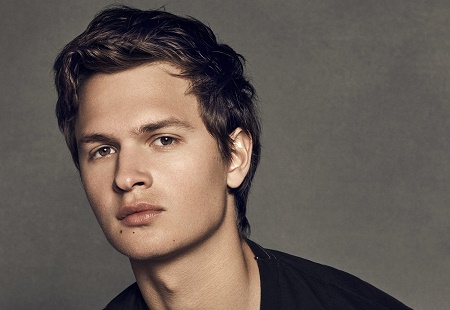 Ansel Elgort is an American actor, singer, dancer, and DJ who got huge fame after starring as Augustus "Gus" Waters in 2014's film The Fault in Our Stars. Also, he is popular for his roles as Tommy Ross in the film Carrie (2013), and as Edgar Wright in action thriller Baby Driver (2017).

He was born on March 14, 1994, in Manhattan, New York City. His mother, Grethe Barrett Holby is an opera director and dancer while his father Arthur Elgort is a photographer for Vogue. Further, he has two older siblings named Warren Elgort and Sophie Elgort. As per his citizenship, he is American and is of mixed ethnicity.

Who is Ansel Elgort's Girlfriend?

She is none other than, his highschool sweetheart, Violetta Komyshan. She is originally from Toronto, Komyshan but she moved to New York City at the age of 5. She is a ballet dancer who studied at the American Ballet Theatre and is now part of the Ballet Next dance company.

The West Side Story star first met his long term lover at the LaGuardia High School of Music & Art in early 2012. Since then, the cute lover has been living a blissful love relationship for almost a decade.

A dancer, Komyshan told once Cosmopolitan that she did not even know Elgort went to her school and she found he was really attractive. She added: "I looked at him and told my friend, 'Oh my God, that guy's so hot,' and she's like, 'Oh, that's Ansel, he goes to LaGuardia".

Did Ansel Break up With Violetta?

Yes, they have briefly ended their togetherness in August 2014 after dating for two years. Ansel 's burgeoning career and hectic schedule was the reason behind their spilt. Then within 6 months, the two reconciled again in February 2015.

Since getting back together, Elgort, 26, and Komyshan, 23, are happily sparking their love life. So far, the dancer Komyshan is very near to Elgort 's family. More joyfully, they do not feel hesitate to share eachother photographs on their respective social accounts.

Similarly, The Goldfinch actor doesn't miss out on getting wild at some of the world's best beaches alongside Komyshan. Recently on the new year special 2020, they spent a week on the beautiful beachside of Cap Cana.

Ansel Elgort who started taking acting classes at the age of 12 has made a considerable amount of wealth. As of June 2020, he has an impressive net worth of $12 million which is alike to Jaleel White and Peter Morgan. He credits most of his earnings to his successful career as an actor, singer, dancer, and DJ.

As an actor, Elgort has gained fame through various internationally blockbuster films and TV series as well. The Fault in Our Stars is one of those movies that earned more than $307 million worldwide on a $12 million budget. Similarly, he reportdely earned less than $5 million, for his appearances in Steven Spielberg's film West Side Story.

Aside from acting, the TV star is also making a million dollars amount as a DJ, under the name “Ansolo”. His famous singles are Home Alone, Thief and You Can Count on Me. Today, he also works as the brand ambassador for the designer Thom Browne.

Moreover, the 193 cm tall Ansel has made his debut in several magazines like Teen Vogue, Elle, Flaunt, Seventeen, 7000, and Rolling Stone.