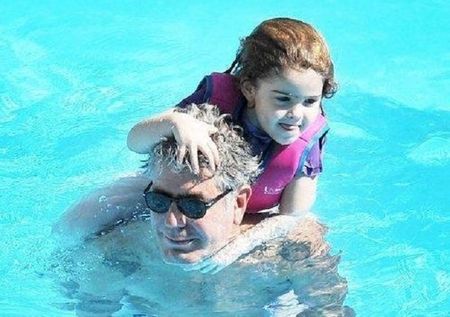 Anthony Bourdain's daughter, Ariane Bourdain, has grown up. The 12-year-old celebrity child of Late Chef with Ottavia Busia was strong and brave in the wake of the tragedy. Her mother is a MMA fighter, just like Hana Ali's parent Muhammad Ali.

Anthony and Octavia's daughter was born on April 9, 2007. At birth, she weighed 7 lbs, nine ozs, which is a healthy weight range for a newborn baby girl. Anthony mentions his daughter in his will, so it seems that Ariane is the heir apparent to her father's multi-million dollar estate.

Is Ariane Dating Someone? Know her Personal Life

Anthony's Daughter is currently 12-year-old and is gaining an education at school. She is keeping herself away from any media and public attention. Sometimes her mother Ottavia posts her photos on her social media, but as it is kept in private mode, it is hard to view.

As per reports, Ariane is very busy in her studies and is not in a relationship. After her father's death, She took to the stage and paid tribute to her late father via her singing. Maybe becoming a successful singer is her dream.

Ariane Bourdain's parents, Anthony and Ottavia, tied the wedding knot at a beautiful ceremony on April 20, 2007. After nearly a decade of living together, they split in 2016. However, the couple never officially filed for divorce.

After the separation with Ottavia, Anthony started dating Asia Argento. Asia is an actress with whom Bourdain was dating before his death. On June 8, 2018, the Chef committed suicide in his residence.

On the other hand, Anthony's ex-wife before Ottavia was Nancy Putoski, with whom he was in a marital relationship between 1985 to 2005. The exact date of their wedding is not apparent, but the couple did enjoy two decades of marriage.

Ariane's Loving Daughter of Both Parents

Bourdain has got the looks of both her mom and dad. The lovebirds evidently shared custody of their daughter while Anthony was alive. With his previous wife, Nancy, the late Anthony did not have any children.

The mother-daughter duo, Ariane and Ottavia, surely have a tight bond. Ottavia and Ariane often pay respect to Anthony via social media posts.

What is Ariane's Net Worth?

Shortly after her father's death, Anthony Bourdain's family revealed that his daughter Ariane was going to be the sole benefactor of his multi-million dollar estate. Well, Bourdain certainly contributed to his daughter's bright future before dying, by making her the owner of $1.2 million worth of assets.

We're sure that Ariane gets offers from the advertisement and television producers to appear in ads and music videos. Speaking of music videos, the Beatles singer Paul McCartney's stepdaughter Heather McCartney might inherit her stepdad's massive fortune.

Apart from the $1.2 million, the exact amount of wealth that Anthony left for his family is not definite. We're sure that he has had other sources of income throughout his long and successful professional career. Besides cooking, Anthony earned his living as a television host and an author of best-selling books.

Following in the footsteps of her loving late father, Ariane might be looking forward to taking the food industry by storm. She is still in school, and we can guess that she is a good student. As she is still a juvenile, it seems that Ariane is not personally active on social media like Instagram and Facebook.

However, owing to the immense fame of her late daddy, many fan accounts might be there to celebrate the beautiful Ariane. Backed by her father's rich legacy and popularity, Ariane might as well make a name for herself by being a professional chef and feeding tasty food millions of people.