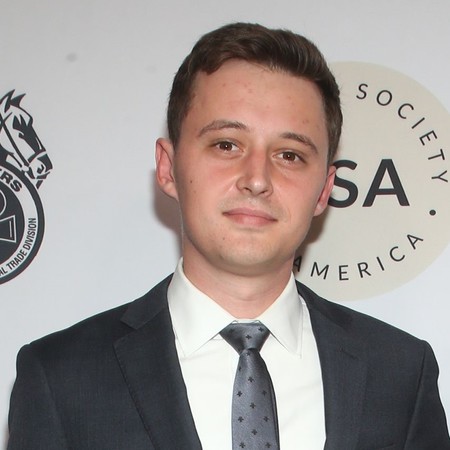 Austen Rydell is an American actor and producer. Moreover, he is famous for his work on  NFL Gameday, The Mensch, Wildflower, Rules of Inheritance, and many others. Apart, he was the co-founder of Live on Arrival based on Bali, Indonesia from June 2014 to October 2018. However, Austen came into limelight in June 2020, after the announcement of his engagement with his long time girlfriend, Billie Lourd.

The NFL Gameday actor, Austen Rydell was born as Austen Christopher Rydell on April 3, 1992, in Los Angeles, California, USA. Moreover, Rydell grew up and raised in a family of actors and directors. But, his parents' and siblings' details are still under review. He holds an American nationality and belongs to white ethnicity. Talking about his education, Austen is graduated from NYU Tisch School of the Arts with a BFA in Theater.

Well, Austen, 28, is in a romantic relationship with his partner. Further, Rydell is engaged to his long time girlfriend turned fiance, Billie Lourd. Moreover, his fiance, Billie is known for her acting for horror-comedy series, Scream Queens and American Horror Story. The couple started to date each other in early 2016 and they were in on-off-relationship many times.

Finally, the lovebirds took their relationship to the next level by making announcing engagement on June 28, 2020. There is no doubt that every relationship faces up and down in their love life, and Billie and Austen also faces the same thing. But, their relationship is very strong and living a happy life.

Besides, the couple has not revealed the wedding date or where it will be held yet. They often share a beautiful picture of their social media account. Apart, we don't have Austen's past affairs and relationship details yet. As of now, Austen is living a happy life with his fiance and family.

Who Is Billie Lourd?

American Actress, Billie Lourd was born as Billie Catherine Lourd on July 17, 1992, in Los Angeles, California, USA. Further, she is the only child of Star Wars actress, Carrie Fisher, and talent agent, Bryan Lourd. She has a half-sister named, Eva Lourd from her first marriage. However, started her acting career from Star Wars: The Force Awakens as a Lieutenant Connix in 2015.

She has worked in every part of Star Wars. Back in 2015, she also appeared in the Fo-horror-comedy series Scream Queens. Currently, she working within the Fox horror anthology series, American Horror Story. In 2020, we can see her in the Will & Grace show.

The six feet and one inch (1.85 m) tall, Austen has collected an impressive amount of money from his career as a producer and actor. Furthermore, his estimated net worth is approximately equal to $3 million which is similar to Contessa Brewer and Robert Wahlberg. However, his exact net worth figure is yet to be published.

On the other hand, he also earns the exact money from his production house. Besides, his fiance, Billie has an estimated net worth of $20 million as of 2020. With such a hefty amount of money, he is living a lavish and luxurious life with his girlfriend and family.

Stay With Married Celeb For Your Favorite Celebrities' Bio!!!