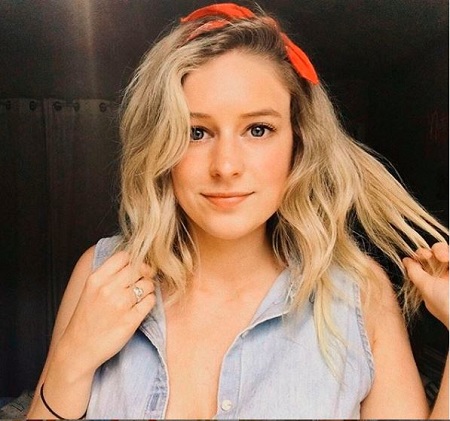 Ava Suppelsa is best known as the daughter of American retired, Journalist, Mark Suppelsa. He is best known for working WGN-TV in Chicago, Illinois as an anchor and investigative reporter. But now Ava has established herself as a young country singer and songwriter in the Chicago, Michigan, and Northwest Montana area. She even released her first EP in 2015.

She was born on June 26, 1997, in Evanston, Illinois United States to the dad, Mark, and mom, Candus Suppelsa. She has one older brother named Matt Suppelsa, 25. She studied the prestigious boarding school Interlochen Arts Academy where she started her songwriting programs at 16. Also, she studied at the Berklee College of Music in Boston. But she moved to Nashville at age 18 to continue her writing.

Is Ava Suppelsa Dating Anyone Currently?

Well, the answer is yes. The 23 years old rising singer, Ava is officially off the market. She is enjoying her love relationship with her handsome boyfriend, Tristan Bushman. He is a Nashville based singer and songwriter.

As per her IG post, Suppelsa and Tristan are reportedly dating each other in June 2019 and are still going strong. For the first time, Ava made her relationship public with her lover Bushman by posting a photo of two on her Instagram account on June 19, 2019, at Rosemary & Beauty Queen.

Recently on June 9, 2020, the pair have marked one year of togetherness. They even made special their 1st love anniversary by posting pictures of two on their respective IG account. While Ava wrote, " Been a whole 365 days of loving ya and I’m gonna love you for many more and my partner in everything with love emoji".

On the other hand, Tristan captioned, " what year it’s been, Words won’t do it so I won’t even try. And Happy anniversary honey, I love you so much, said. Thus, they are gracefully enjoying each other company a lot. Also, they frequently appear in various live concerts together.

Her Total Amount Of Net Worth

Ava is a rising singer and songwriter who mainly focuses on writing new music, playing, and recording shows. Her music is a blend of modern pop, folk, and from old-school country to jazz. So as of 2020, her net worth is estimated at around $300 thousand. Narvel Blackstock is another songwriter with the worth of $5 Million.

Suppelsa even worked with legendary artists like Chris Young, Desmond Child, and Josh Groban. Also, she became a winner of the Michigan Music Educators Association Composition Competition for her original compositions.

Moreover, Ava has an extended list of live performances such as the Do Division Street Festival, the Hard Rock Cafe Chicago, and the WGN Chicago Radio and Morning News. Recently in 2020, she signed a worldwide publishing deal with Warner Chappell Nashville and King Pen Music.

On the other hand, her dad, Mark has experienced a long career in the broadcasting field spanning nearly four decades. His net value is estimated at around $1 Million.

Yes, Mark who started working for the campus radio station WMUR as a disc jockey and newsman now retired from the journalism career. He announced his retirement on December 8, 2017, after working 39 years in the news field.

The reason behind his retirement was that he wanted to spend more time with his family members. Throughout his career, he has worked for WMAQ-TV in Chicago, WFLD-TV, WGN-TV, WTMX-FM radio in Chicago.