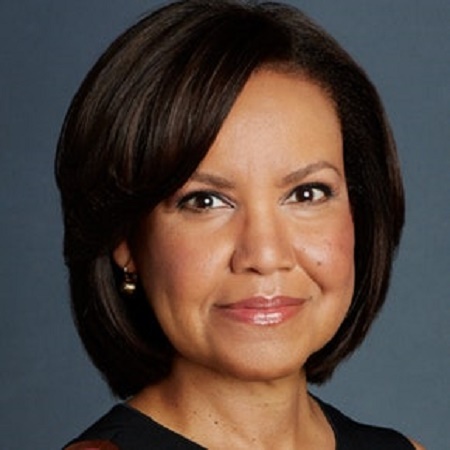 Bertha Coombs is an American journalist best known for her work with the worldwide news network CNBC. Her different work as a journalist, news reporter, and news anchor has made her a well-known name in the news broadcast industry. As of October 2019, she is serving as a general assignment reporter at CNBC.

Coombs was born on 28th December 1961 in Havana, Cuba, which is a protectorate of the United States. She is 57 years old as of October 2019. She belongs to mixed ethnicity and holds American citizenship. Apart from this, she is living a well off and happily single life, to know more keep reading.

Bertha Coombs got married to a mysterious man. This beautiful anchor further keeps her wedding details away from the media. According to her Instagram post, she and her partner tied the knot on 27th April 2019.

The reporter also posts several pictures with her husband on social media. Likewise, how the couple met and went on to become life partners is also still a mystery to the public.

Used To Own A Black Terrier

Coombs used to own a black terrier dog, which she very dearly loved. The dog passed away some time ago, and she posted on social media expressing her grief for her departed friend.

As of now, she owns a dog named Rocco.

Coombs is a well-respected and well-known journalist who has worked in news broadcast for a lot of years. Thus from her extensive journalism career, she has managed to amass a net worth of around $500 Thousand to $800 Thousand as of 2019.

A CNBC correspondent further makes an annual salary of $108,497 to $133,942. Add to this; she might also receive bonuses and other incentives to boost her yearly income. Another CNBC anchor, Seema Mody, also has a similar revue.

The reporter attended The Park School in Brookline, Massachusetts, for her primary education and then went to Milton Academy in Milton, Massachusetts. After graduating from Milton, she joined Yale University.

The news anchor additionally was once part of another news and media giant ABC News where she served as a news anchor and reporter. She gathered a lot of praise for her reporting and covered major events like the Clinton impeachment, the Kosovo crisis, Hurricane Floyd, Rudy Giuliani's troubled marriage, and the John F. Kennedy, Jr. plane crash among others.

Despite her success at ABC, she later joined CNBC and proved equally proficient at her work there too.

For more bio and articles of celebrities, visit marriedceleb.