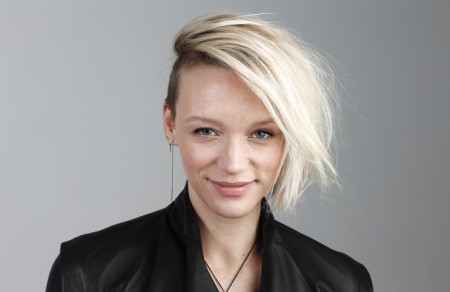 The former Danish model, Betina Holte, is an intuitive designer who is paving her way into the world of fashion. She has graced the cover of Vogue, Glamour, and Elle. She has been featured in global advertising campaigns for Armani and Ralph Lauren and having walked numerous runway shows.

Holte is one of the most prominent models of her time, mostly working actively in the 1990s. Further, she is also known as the wife of a Cuban actor and personal trainer, Carlos Leon. His relationship with the American singer/songwriter, Madonna, created a great hype.

The Zac Posen designer, Betina Holte, exchanged her wedding vows with actor Carlos Leon in July 2013. Their wedding ceremony was held privately at a picturesque church in Gillelje, Denmark.

Betina looked elegant in a fitted white gown that flowed out at the hips and ended in a dainty lace hem. Meanwhile, Carlos looked sharp in a grey suit and purple buttonhole flower that matched his bride's gorgeous bouquet.

The blonde beauty looked radiant as she turned to her husband, and they both smiled affectionately. Among the guests were close families and friends, including Carlos's daughter, whom he shared with his former girlfriend.

The model-turned designer and the actor-turned personal trainer is married for over six years as of 2020. As per Page Six, they are happy with each other and are jointly raising their 4-year-old son, Meeka Leon.

Lourdes' parents, Carlos and Madonna, had a passionate romance back in the 1990s. They split in 1997 just after Lourdes was born in October 1996.

Betina Holte has previously dated one of Hollywood's biggest actors, Jim Carrey. Jim began dating then 23-year-old Holte in 2003, but their romance lasted for less than a year.

In September 2003, Carrey shelled out nearly $127,000 on a three-day Copenhagen trip to meet his girlfriend, Betina, who was then half his age. They first met at a July showbiz bash in New York.

As mentioned, Carlos and Madonna first met in 1994 in New York City. They had a passionate affair, and their relationship was much-talked topic back then.

Carlos and his ex-lover, Madonna, dated for two years. They split in 1996 shortly after their daughter Lourdes Leon was born. Although they are separated, Carlos is still grateful to his ex.

Holte is also the co-founder and chief creative officer of her self-titled brand. Just like Sunshine Deia Tutt, Holte pursued her designing career. The brand focuses on developing the clothing collection, as well as fine jewelry and home collection.

For her innovative creation, Glamour magazine named Betina one of the Top 35 Fashion Insiders Under 35 in 2013. Her style has been featured in ‘The Cut’ and Allure, and she is regularly sought out for private design commissions. Meanwhile, her spouse, Carlos, has a net worth of $1.5 million.