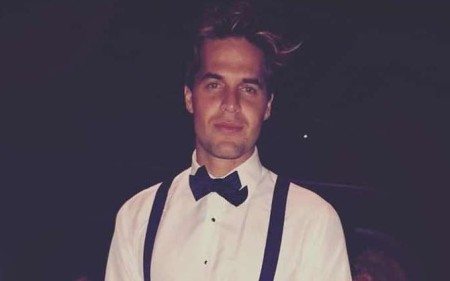 Billy McKeague is one of those individuals who come to prominence after having a relationship with a celebrity partner. Billy is a former hockey player and athlete best known as Victoria Azarenka's ex-boyfriend. Victoria is a famous Belarusian professional tennis player.

Billy and his ex-girlfriend, Victoria, share a son named Leo. After splitting in 2017, the couple had a long-custody battle over their son. EVentually, Victoria won the case, and she is now living with her son.

The couple first met in Kauai, Hawaii, in 2015, where Billy was working as a golf pro. Meanwhile, Victoria was visiting along with her volleyball icon friend, Gabrielle Reece. Soon after meeting, the pair began a romantic relationship.

Further, Victoria purchased a house in California, and they began living as partners. On July 15, 2016, she announced her pregnancy. After nearly five months, their son, Leo Azarenka McKeaugue, was born on December 19, 2016.

Less than a year of their son's birth, Billy and Victoria decided to separate for undisclosed reasons. Just after the 2017 Wimbledon, they split, and the custody battle over their son began in August 2017.

Billy and Victoria's custody battle became a major headline all over the media. Further, Azarenka had to withdraw from the remaining 2017 tournaments. She said: "I wouldn't wish that on anybody to go through what I've been going through, but it's part of life, and there are blessings in this situation as well for me."

Billy and Victoria's case were supposed to be resolved in 2017. However, they were unable to agree on custody terms. As a result, they got involved in a bitter custody battle, which went on for three years.

After several appeals, Victoria finally won the custody of her son. As per DailyMail, she and Leo are enjoying the quarantine amid the coronavirus pandemic. It is not known if Victoria has permitted Billy to see their son.

There is not enough information about Billy's net worth and earnings. His current whereabouts and professional details are also not available. He might be working for his parent's company.

Meanwhile, his ex-girlfriend, Victoria Azarenka, earns a huge sum of money from her professional career. She has a net worth of $20 million as per celebritynetworth. Further, her prize money sums up to $30,650,035.

The former world No. 1 in singles, Azarenka also has several endorsements and ventures. In 2013, Red Bull negotiated a deal with Azarenka making her the first tennis player sponsor for the beverage company. Her other endorsements partners include Nike, Yonex, American Express, Six Star Pro Fitness, InstaForex, and Citizen Watch.

Billy McKeague was born in 1989 in St. Louis, Missouri, the United States. He was born to parents, Chase (father), and Lynn McKeague (mother).  His father is the chief of an investment group Chase and Company, established in 2005. Likewise, his mother serves as the director of marketing in her husband's company.

Billy has two siblings; Lisa and Charlie McKeague. He attended the University of Missouri. There he played hockey for three-season from 2008-2012.