Blake Gray is having an unbreakable healthy bond with Olivia Occigrossi 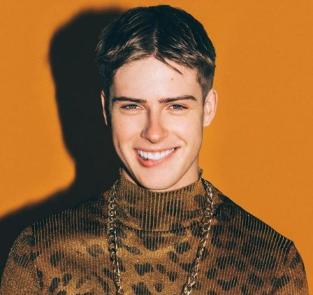 Nowadays many people are gathering a large fan base through various social sites. Blake Gray who is Instagram Star is one of the popular among Millions of people around the world. He holds an Instagram account on Blake Gray where he has a fan following over 2.6 Million.

The nineteen years old, Houston native, Blake is currently enjoying his dream as a social media influencer. And has become a supporting act on Jacob Sartorius's Sartorian Summer Send-Off tour. Previously he was a member of the Magcon 2016 tour.

Let's know better about Blake's personal life and his girlfriends.

Who is Blake currently dating?

Both great public figures are known to be dating one another since 2018. They are often seen uploading one another pictures on their respective social media account where fans are seen congratulating the couple.

On February 15, 2019, he even uploaded a video of him and Olivia on his Instagram account stating " very thankful for this one right here (: happy Valentine’s Day babe, can’t wait for many more ❤️". The cute couple is still very deep in love with one another and loves spending quality time with each other.

Are they broken up with one another

The many media posted regarding the pair break up at the end of 2019. It broke the heart of many fans of their around the world. The comments section was filled stating whether you guys are still together or not.

However, on that response, none of the parties has spoken. It has been still unclear whether they are in a relationship or not?

On June 17, 2019, Olivia posted of her and Blake on her Instagram account captioning "Sending love and prayers to my best friend today. He’s had an incredibly rough couple of weeks, and today will be having his last surgery for the next few months." And this was the last time that either of parties has uploaded one another photos in their social sites account.

Previously was in a relationship with Elle Danjean

Elle Danjean and Blake were one of the highlighted couple in 2018. Elle who is a dancer was part of the North West Florida Ballet for six years. They dated briefly for several months and later broke up.

The reason for their separation has been officially stated yet. Though they has erased all of their traces of one another from their account.

As of now, Elle is dating another Instagram star Bryce Hall and seems to enjoy his companionship.

For more gossips and biographies, stay tuned to married celeb