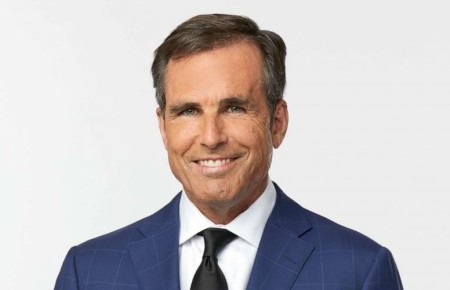 Bob Woodruff is an American television journalist who has won multiple prestigious awards. He is currently a news reporter at ABC News, and previously he was the co-anchor for ABC World News. In 2006, he was severely injured by a roadside bomb in Iraq.

Robert Warren Woodruff was born on August 18, 1961, in Bloomfield Hills, Michigan, the U.S. He is 58 years old as of 2020. Woodruff was born to Frances Ann Dawson (mother) and Robert Norman Woodruff Jr. (father), who were real estate agents. Robert graduated with a B.A from Colgate University, and he earned a Juris Degree from the University of Michigan Law School.

Woodruff's longtime wife is Lee McConaughy, whom he married on September 11, 1988. The couple has been together for over three decades. Bob and Lee first met while they were studying at Colgate University.

Their wedding ceremony took place at the Helen Hughes memorial Chapel in Silver Bay, New York. At that time, Woodruff was working as an associate at a New York law firm. His spouse is a speaker and author of three books, among which one is the best-seller called, In An Instant.

The news reporter and his wife share four children, Macklin, Cathryn, and twins, Claire and Nora. Bob and Lee together work with non-profit organizations, and they are the founders of the Bob Woodruff Foundation. The family often travels and enjoys camping and vacationing.

Like Woodruff, his wife is also a journalist apart from being a writer. Lee often appears as a contributing reporter for ABC's Good Morning America and CBS' This Morning. Her first novel, Those We Love Most is a New York-Times best seller. She also runs a consulting business. Another ABC reporter, Clayton Sandell, also has a happy married life.

Nearly killed while doing his Job

On January 29, 2006, Woodruff was embedded with the United States 4th Infantry Division near Taji, Iraq. He was assigned to report the transfer of power between the U.S and Iraqi security forces for ABC's World News Tonight.

Bob and his cameraman Doug Vogt were traveling in an armored vehicle wearing helmets and body armor. They stood their heads above the vehicle's hatch to capture the footage for a report.

A roadside bomb in Iraq severely injured bob and his cameraman

Unfortunately, the vehicle hit a roadside bomb, and Bob nearly died due to shrapnel wounds to the head. Luckily he was rushed for surgery at an Air Force hospital in Iraq. A bunch of soldiers, medics, and military medical professionals saved his Life. He spent 36 days in a medically-induced coma at the Naval Hospital, Bethesda.

Bob's recovery from the traumatic brain injury was said to be a miracle. At present, he is helping veterans and military personels who are affected by TBI. Further, his wife, Lee, earned critical acclaim for sharing her family's journey to recovery in her book. On ABC World News, anchor, Elizabeth Vargas, discussed the dangers of reporting in a combat zone.

The Peabody Award-winning journalist, Woodruff, has a net worth of $5 million as of 2020. He has amassed a decent amount of fortune over his 20 years of a professional career. Before becoming a journalist, Woodruff worked as a corporate lawyer, teacher, and interpreter. At present, he earns an annual salary of over $93,253 as an ABC correspondent.

Woodruff has traveled across the world, reporting stories about war and its effects. Besides, he is also actively involved in charity and foundations. On average, the ABC correspondents' earnings range from $42,000-$150,153. He is still active in journalism even after surviving such a traumatic incident.

After the recovery from his near-death experience in Iraq, Bob established the 'Bob Woodruff Foundation' in 2006 along with his wife. The foundation aims to provide the nation's impacted veterans, service members, and their families access to the highest level of support and resources.

To date, Woodruff's non-profit foundation has raised more than $40 million and invested in grassroots organizations and programs around the country that are helping veterans reintegrate into their communities.

On August 4, 2020, the Bob Woodruff Foundation announced an investment of $1.6 million. The money will be given to the organizations that provide programs and services to veterans, caregivers, and military families. Since January 2020, the foundation has invested over $6 million.

Woodruff succeeded Peter Jennings as a co-anchor of ABC World News Tonight in 2005. A year later, he won the Radio and Television Associations' David Bloom Award for Excellence in Enterprise.

In 2007, Woodruff won the Peabody Award for reporting Wounds of War along with winning the Civilian Service Award. Further, in 2016, he became a recipient of Public Leadership in Neurology Award (PLINA).

Father-Son duo in a Television Show

Bob and his son, Mack, appeared in a new limited series called Rogue Trip in 2020. The show is streaming on Disney+, and it shows the father-son duo venturing to six countries torn by war.