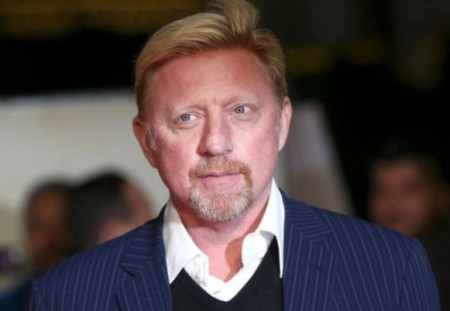 The 51-year-old, Boris Becker is a former German world No.1 professional tennis player who won the first of his six major singles titles at age 17. He became both ATP and ITF's Player of the Year in 1989. After his successful career ended, Becker has engaged in numerous ventures, such as working in the field of poker.

At the peak of his career, Becker had amassed a reported $63 million. However, on June 21, 2017, he was declared bankrupt, and in 2019, he was forced to auction off 82 collectibles from his personal collection. Boris makes headlines for his notorious personal life and has been in a relationship with many women. However, he has been married twice and has four children.

The German Ace, Becker 's first spouse, was Barbara Feltus Becker, a German-American designer, former actress, and model. Boris and Barbara met in the fall of 1991 and began a romantic affair. Their wedding ceremony was held on December 17, 1993, at the registry office of Becker's hometown of Leimen.

Before the marriage, the former couple shocked the German fans and sports enthusiasts by posing nude for the cover of a weekly news magazine, 'Stern' in a picture taken by Barbara's father.

At the time of their marriage, Barbara was eight months pregnant with Becker's child. Their first son Noah Gabriel was born on January 18, 1994, and their second son, Elias Balthasar, was born on September 4, 1999.

Reason Behind Boris and Barbara's Divorce

After seven years of marriage, Becker asked Barbara for separation in December 2000, and he was granted a divorce on January 15, 2001. Barbara left for Florida after a woman who claimed to be pregnant with Becker's child contacted her.

Further, Becker stated in his autobiography that he admitted to his wife about having a one night stand while Barbara was pregnant with their second child. Following the divorce, Barbara received a $14.4 million settlement, their condo on Florida, and custody of their children.

In February 2009, Boris announced on a television show that he and Sharlely "Lilly" Kerssenberg were to be married. The wedding took place on June 12, 2009, in St Moritz, Switzerland.

How did they meet? Lilly is a Dutch model, and she met Boris during the separation phase of her first marriage with lawyer and entrepreneur, Michael R. Bermann. At the time, Boris had a birthday party with his son on September 4, 2005, in a pizzeria in Miami Beach.

The former couple has a son named Amadeus Benedict Edley Luis Becker, born on February 9, 2010. Unfortunately, Boris and Lilly separated after nine years of marriage in May 2018.

Around mid-2019, reports suggested that Boris began dating a British model, Layla Powell. They made their first public appearance together on South London for the annual Wimbledon Championships in July 2019.

Layla, who is twenty years younger than Boris, had known him for several years. During the initial phase of their romance, the couple said that they were just close friends, but now, with the growing attachment, it seems that they are definitely romancing each other.

Relation With Multiple Women; Past Affairs

Throughout his personal life, Boris had many girlfriends and had physical relations with multiple women. Before marrying Barbara, Boris was in a relationship with Benedicte Courtin, the daughter of the Chief of Police of Monaco.

In February 2001, Becker accepted the paternity of a daughter, Anna Ermakova, with Russian waitress Angela Ermakova. He took the step after the media reported that he had a child after having a sexual encounter in 1999. Further, Becker was engaged to Alessandra Meyer-Wolden in 2008 for a short time.

The former World No.1 tennis player, Boris Becker, has a net worth of $10 million as of 2019. However, at the height of his career, Becker had amassed a reported $130 million in prize money and sponsorships.

Throughout his career, Becker has won many awards, and Tennis magazine ranked him the 11th best male player of the period 1965-2005. Since 2000, Becker has been the owner of the tennis division of a tennis racquet and clothing manufacturer. Also, he is a noted poker player and has appeared in the European Poker Tour and the World Poker Tour.

At present, Becker owns his personal line of tennis racquets and apparel. He published his autobiography in 2003. Since 2003, he has been the commentator for the BBC at Wimbledon. In May 2009, he announced the launch of the online media platform, Boris becker TV.

Bankruptcy: How Boris Becker Lost It All?

In 2017, Boris was declared bankrupt by a British court and reported that he almost lost most of his career earnings. The judgment of debt against Becker was issued in October 2015, when a debt owed to a private bank for $14 million was not paid before the assigned deadline.

On June 24, 2019, the media reported that Becker was forced to auction his 82 collectibles from his personal collection.

He lost a major portion of his earnings to his first wife, where he had to shell out more than $25 million in the divorce settlement, his luxury condo in Miami.

This article is about the former World No. 1 Tennis Legend, Boris Becker. To know about your favorite athlete, follow marriedceleb.