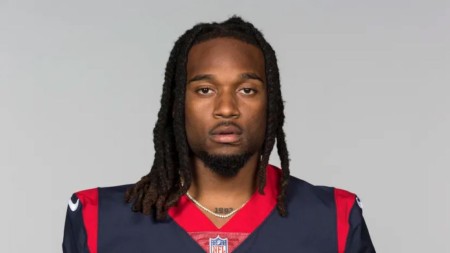 American football player, Bradley Roby is well known for playing as the cornerback for the Houston Texans in the National Football League (NFL). During his career, he became the Super Bowl champion, All-American with Houston Texans, and received two All-Big Ten titles with Denver Broncos.

Roby was born on 1st May 1992, in Fort Worth, Texas, United States, and hails from African-American heritage. He is the son of Betty Roby (mother) and James Roby (father). Find more about Roby's personal life in the below.

Houston Texans cornerback, Roby is currently single and keeps his personal life close to himself. Being a star player, he focuses a lot on his career rather than trying to find the perfect partner for himself. But his fans are curious to know if he is in a relationship or not.

Roby is currently focusing on his upcoming football games and chasing his dreams of becoming a successful football player in America's history. He is so passionate and hardworking because of that he doesn't have time for dating or getting married yet.

As per rumors, Roby was romantically linked with an Atlanta based Stripper, Sade Bagnerise. The footballer booked a VIP seat for Sade and flew her out from Atlanta for the game. Many guessed her to be his girlfriend, but Roby cleared the air by proclaiming to be single.

Once again, Bradley was seen with a woman at the 32nd annual Cedars-Sinai sports spectacular program on 3rd April 2017. However, the Houston Texans star player denied the dating rumors and reported to be single until and unless he gets his perfect life partner.

On 24th July 2013, the Bloomington Police arrested NFL cornerback, Roby for misdemeanor activity after an overdose of alcohol. The incident took place at the Dunkirk Bar at 2:40 AM when private security detained him after a conflict with a customer.

Roby later went out of the bar but started to enter back where the security guards stopped him. He started pushing the guards and tried to enter the bar. The police arrived at the scene and took control of the situation.

Bradley pleaded guilty in the court for misbehaving and conflict conduct. On 16th August 2014, the police released him after completing a pre-trial diversion program.

Similarly, On April 22, 2014, Roby found himself in the police custody in drink and drive case. At that time, he was in a Dodge Charger and nearly had an accident with school-going kids on the sidewalk.

The officers found him with robust pervasive alcohol and drugs when they opened the car's door. Bradley, furthermore, conducted a sobriety test, which he failed to pass. Shortly after that, the cops took him into custody.

The Franklin County court found Roby guilty and took action against him. The team suspended him from a couple of games until the time he was in jail for 180 days. Soon after that, he attended a three-day driving intervention program and bailed at $375 or more.

Bradley has a net value of $28 Million as of 2019. Most of the contribution in his fortune came from his playing remuneration. He received an enormous salary of $25,482,995 throughout his career. Similarly, there are some of his career earnings, including all-cap hit and seasonal signing with top teams, in the following table:

Professionally Playing in the NFL

The footballer started his career in 2014 after getting drafted by Denver Broncos. Broncos selected him in the first round from the overall 31 rounds. He spent his five years playing alongside DeMarcus Ware, Drew Lock, and Von Miller, among others.

Roby later began a new journey with Houston Texans on 14th March 2019. There he joined an exciting new coach, Matt LaFleur and his team. He made his debut against the New Orleans Saints where he scored nine tackles in the 30-28 loss.