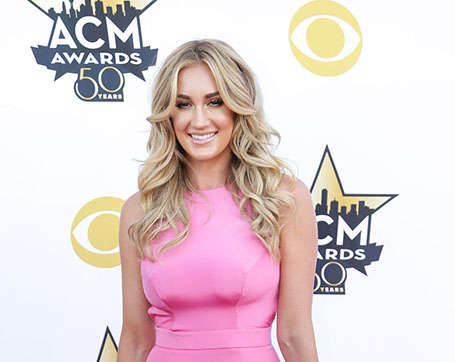 American cheerleader and singer Brittany Kerr got to know singer and songwriter Jason Aldean for the first time in 2012. Now after nearly eight years, she is best known as the better half of the famed country singer.

Brittany was born on June 19, 1988, in Charlotte, North Carolina and her birth name is Brittany Layne Kerr. She is one of the two kids of Donald Kerr and Debbie Kerr. Brittany has a brother named Hunter Kerr. In 2002, Brittany participated in singing reality show American Idol.

Married to Jason Aldean since 2015

Brittany and Jason's love affair came to the public on August 4, 2001, after an Aldean admitted to having acted inappropriately at a bar. After the incident, he released an apology statement on social media. The couple then began dating each other.

They made a public appearance together at the 2014 CMT Awards. In the same year, they announced their engagements. Brittany made the engagement official by posting a photo of her and Jason in her Instagram account. She even showed off her engagement ring in the photo. Brittany wrote;

We’ve been on cloud nine the past few days!! Can’t wait to spend the rest of my life with this man. So many blessings and memories are in our future and SO thankful I get to share them with him.

A year later on March 21, 2015, Brittany and her fiance, Jason was pronounced husband and wife. It was her first marriage but her husband was already a divorcee. On May 8, 2017, the pair announced that they were expecting a baby. Their first child was a son Memphis Aldean, born in December 2017.

When Brittany and Jason began a love affair, he was still married to his first wife Jessica Ann Ussery. Jason and Jessica had tied the marital knot on August 4, 2001. Jason filed for the divorce on April 26, 2013. Their divorce paper mentioned irreconcilable differences between Jason and Jessica. The same date was listed as their official separation date. So, what was the reason behind their separation?

Brittany's net worth is estimated to be more than $3 million. While she earns a decent sum by herself, Jason seems to be the ultimate breadwinner of the family. In 2015, Forbes estimated Jason's annual income at $43.5 million. He was also the seventh highest-earning country musician in 2017 with an annual income of $32.5 million.

Currently, the couple is busy constructing their house which is referred to as a mansion or castle by many. Brittany's husband shared the exterior and interior of the house in his Instagram video. The pair and their kids are reported to move in the house in the coming May.