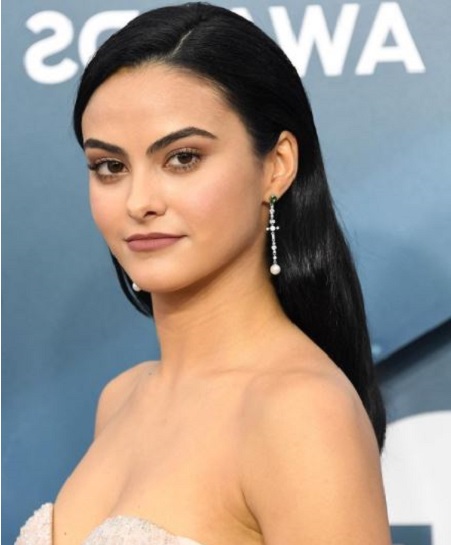 Camila Mendes is an American actress who earned immense popularity after playing the role of Veronica Lodge on the teen drama TV series Riverdale. It debuted on January 26, 2017, on The CW.

Who is Camila Mendes Boyfriend in 2021?

He is none other than, Grayson Vaughan. He is a photographer who has worked with well-known celebrities such as Hailey Rhode Bieber and Amy Adams for cover shoots.

The new couple began dating in 2020 and were first photographed together in February 2020 in LA. However, they did not accept their love affairs until August. Ever since the actress is enjoying her blissful love relationship with her beau Grayson for over a year.

Not only this, Mendes frequently shares a glimpse of her boyfriend on her Instagram page. On October 30, she posted the snap of two on the occasion of his birthday saying: " you just had to be a Scorpio huh. love you birthday boy".

Before started dating Vaughan, the 28 years old star was dating her Riverdale's co-star, Charles Melton, 30. He is an American actor and model.

They first started dating at the end of summer 2018 after meeting on the set of Riverdale. They even marked their one-year love anniversary on August 23, 2019, posting a kissing snap of them on their social media account.

"365 days. I love you," the actress wrote. But after being together for over one year, they have called it quits. The co-stars who play Veronica and Reggie on the show said: "they are taking time now to focus on their work and themselves."

How Much is Camila Mendes Net Worth?

As of early 2021, Camila Mendes has a whopping net worth of $3 Million, according to Celebrity Net Worth. She has gathered her worth throughout her work in films and TV shows. Since 2017, she has been working in the entertainment industry.

Her breakthrough performances came in 2017 when she joined the CW's teen television series Riverdale. She's playing the main role, Veronica Lodge, alongside Madelaine Petsch as Cheryl Blossom, Ashleigh Murray as Josie McCoy, and others.

The 1.57 m tall, Mendes earns $40,000 per episode of Riverdale. Her other acting credits include The New Romantic, The Perfect Date on Netflix, The Simpson, and Dangerous Lies on Netflix. Apart, she has accumulated 25m followers on her Instagram page

Camila Mendes was born on June 29, 1994, in Charlottesville, Virginia, as Camila Carraro Mendes. She is the second child of Brazilian parents Gisel Mendes, a flight attendant and Victor Mendes, a business executive.

She has a sister named Kiara Moreno. Spending her childhood in Florida, she studied at the American Heritage School. Then she graduated from the New York University's Tisch School of the Arts with a Bachelor of Fine Arts degree in May of 2016.