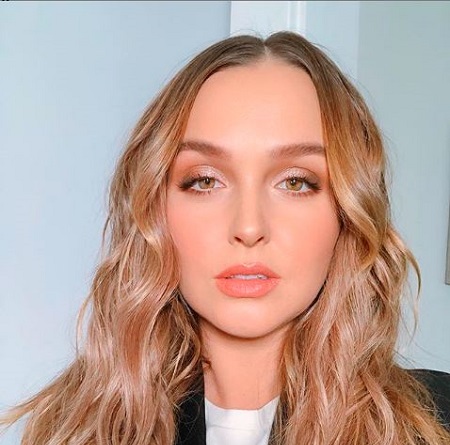 Camilla Luddington is a British-American actress who gained enormous popularity after portraying the character Jo Karev in the ABC medical drama, Grey's Anatomy. Further, she is famous for starring as Kate Middleton in the 2011's film William & Kate: The Movie.

Who is Camilla Luddington's Husband?

Thirty-six years old actress, Camilla is officially off the market. She is happily married to her long term life partner, Matthew Alan. He is an actor who has acted in several TV series such as Veronica Mars, Lost, Modern Family, and The Mentalist.

Luddington met her boyfriend, Alan while working in a Los Angeles's restaurant in the late 2010s and became stronger ever since. In 2008, they went to a Temper Trap concert together and it was their first date. After a few years of love romance, they became engaged on January 17, 2018.

The actress announced their engagement news through her Instagram post by sparking her diamond ring. "So this happened on New Year’s Eve,” she wrote. “I’m not sure I even let Matt get through his proposal before I started yelling YES YES YES!! Of course, it was a yes!”, she added.

Finally, the beautiful lovebirds walked down the aisle on 17 August 2019 Saturday. The intimate oceanside ceremony took place at Calamigos Ranch in Malibu, California. It was officiated by their best friend Shawn Aly.

Their reception party was held at the Ritz-Carlton Bacara Hotel in Santa Barbara, California. More than 70 guests including their closest family and friends including former Grey’s costar Jessica Capshaw were attended their day.

Yes, Grey's Anatomy star is a mother of two kiddos she shares with her spouse, Alan. Before their wedding, they announced on 21 October 2016 that the couple were welcoming their first child together.

On March 9, 2017, their daughter Hayden Alan was born. After seven months of their wedlock, they again announced Luddington's second pregnancy on 9 March 2020.

Their youngest son Lucas Matthew Alan was born on 7 August 2020 during a pandemic. "Matt and I are SOOO happy to announce the birth of our sweet baby BOY Lucas", she wrote on her IG wall.

How Much Is 2020 Camilla Luddington's Net Worth?

Camilla has successfully gathered a huge amount of money beginning her acting career in 2007. As of 2020, her net worth is around $2 Million, which she has earned from her various acting work.

However, her breakthrough role came when she became the regular cast of the ABC medical drama Grey's Anatomy in July 2012. Now, she portrays as  Dr. Jo Wilson. As per her salary, it is reported that she gets paid $350,000 per episode.

Her hits TV series are CSI: Crime Scene Investigation, The Forgotten, Big Time Rush, and Days of Our Lives.

Luddington has made an appearance on Hallowe'en famous television series, Fashion Police on E!. It ran from September 10, 2010, to November 27, 2017.

It was originally hosted by Joan Rivers. But after his death on September 4, 2014, his place was replaced by comedian Kathy Griffinin January 2015. Other cast members include Kelly Osbourne, George Kotsiopoulos, and Kris Jenner.

Camilla was born on 15 December 1983 in Ascot, the United Kingdom as Camilla Anne Luddington. Her father name is Martin Luddington while the mother is unknown. She has three siblings named Amy Luddington, Daniel Luddington, and Joey Luddington.

When she was 11, she started studying at the Italia Conti Academy in England. After moving to Austin, Texas, she studied at Westwood High School for one year. But again she returned her hometown England and finished her education at TASIS (The American International School in England) in July 2002.

At age 19,  Luddington attended the Susquehanna University but she transferred to New York Film Academy after 6 months. After training as an actor at Italia Conti Academy of Theatre Arts, she moved to Los Angeles to pursue an acting career.