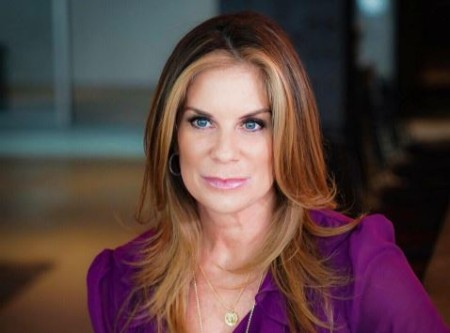 Carol Anne Riddell is an American reporter and journalist who has been working as a reporter/host for CUNY TV since 2010. Previously, she worked for WNBC-TV and New York 1 News as a reporter. Riddell specializes in the news on children and education.

There is not much information about Carol's early life, but her age is around 50 years. She might be born in 1970. Carol graduated with a B.A in English/Drama from Tufts University. Likewise, she earned a Master's degree in journalism from Northwestern University.

The reporter has been married twice, and currently, she is living with her second husband, John Partilla. He is currently working as the CEO of Screenvision Media. The couple first met in 2006. Further, their wedding ceremony took place in the presidential suite of the Mandarin Oriental New York Hotel on December 11, 2010.

Carol and John has been married for nearly ten years as of 2020. They have children from past marriages. Carol has two kids, a son named Will Ennis and a daughter named Allie Ennis. Likewise, John has two daughters and a son.

Riddell and Partilla began a relationship while they were still married to their respective spouses. Riddell was married to her husband, Bob Ennis. Meanwhile, John was also a married man. Therefore, Carol faced a lot of criticism when she left her ex-husband to be with Partilla.

Trapped by Relation, Bounded by Love

Carol and John first met in a pre-kindergarten classroom in 2006. Their children used to attend the same Upper West Side School. At that time, Riddell worked at WNBC television, while John was a triathlete and a president of media sales at Time Warner.

When Carol first saw John, she felt an instant connection. Likewise, John also felt that their attraction was immediate. Therefore, they began talking, became friends, and their spouses also became friends. Further, the four of them used to hang out together at dinner, Christmas parties, and vacations.

While both Carol and John had feelings for each other, neither of them proposed until May 2008. They had a sense of wrongdoing, but they also wanted to be together. Therefore, John first proposed Ridell while inviting her for a drink at a neighborhood bar, O'Connell.

No doubt, Carol said yes, but the couple had either to break their marriage or deny their feelings. As a result, both separated from their spouses by late 2008 but waited until July 2009 before moving in together.

Carol and John mutually separated from their respective spouses and finalized their divorce in 2010. Afterward, the pair legally married at the Marriage Bureau in New York in November 2010.

Before marrying John, the journalist was married for 13 years to her ex-husband, Bob Ennis, from 1997-2010. Bob is a former media executive and is the father of Carol's two children.

When Riddell told about her affair, Ennis didn't create a scene; neither he made any legal charges. However, he criticized his ex-wife for being a self-centered egoist. Bob further stated that the behavior was a self-serving act by a couple of narcissistic people. Well, a famous new host, Jesse Watters, was also involved in an extra-marital relationship.

The award-winning journalist, Carol Anne Riddell has a net worth of $2 million as of 2020. With a career spanning nearly three decades, Carol has amassed a decent fortune. She has been working as both reporter and anchor since 1992. Riddell earns an annual salary of over $52,321.

Riddell began her career with New York 1 News in 1992. After working for four years, she then joined WNBC-TV and worked until 2009. Since May 2010, Carol is the reporter/host for CUNY-TV. The average salary for television reporters ranges somewhere between $38,342-$121,000 per year. Another CUNY journalist, Ernabel Demillo, also has decent earnings.

Apart from having a lucrative sum of money, Carol is also recognized for her work. She was a part of the News 4 New York team, which won an Emmy Award. Ridell has won three New York State Broadcasters Association Awards. Similarly, she has received a National Award for Education Reporting.