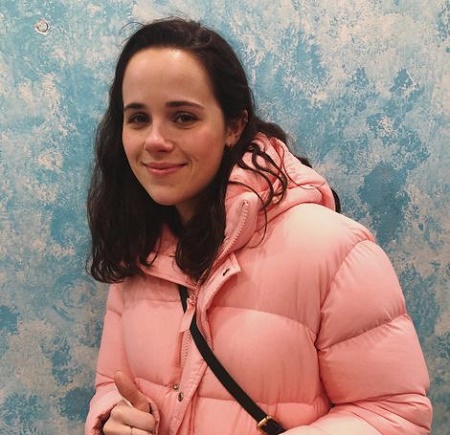 Celebrity kids are always on limelight not because they have achieved something, but they are related to popular faces. Caroline Couric Monahan is one of them who is best known as the youngest daughter of Katie Couric, and late NBC News legal analyst, Jay Monahan.

Caroline was born on January 5, 1996, in New York, United States. Moreover, she was raised along with her eldest sister, Elinor Tully Monahan. She holds American citizenship and is of white ethnicity/race.

The 23-years-old Caroline is possibly single as of now and focusing on her writing career. Being a celebrity kid, she knows how to handles her personal life private, which might be the reason; she never discusses her love life to the public.

Monahan is quite active on Instagram and often shares a glimpse of her daily life. Recently on September 2019, she shares a post wearing her mother wedding dress captioning," I'm getting married too, sweetie." Afterward, many started speculating of her marriage, but she teases her followers as her elder sister is going to be married soon.

Her parents, Katie and Jay, first met when her motherwas working for NBC, and her father was a lawyer in Washington, D.C. After years of dating, the two united as a life partner on January 24, 1989, in Washington in front of their loved ones.

Soon after the marriage, the couple moved to New York City, where Katie started working on Today in 1991. At the same time, Jay became a legal analyst at NBC News for high profile cases, including the O.J. Simpson trial.

When Caroline was only one, her father, Monahan, passed away at the age of 42. Her mother, in an interview, said the diagnosis of Jay made her world go from "complete contentment to complete chaos." Jay ultimately lost his battle with cancer on January 24, 1998, after being sick for nine months in Lenox Hill Hospital located in Manhattan.

"I wish that I had the courage to really talk to my husband about the fact that he was probably going to die. It was too terrifying," and. "I think that prevented me ... from ever really saying goodbye."

Since the death of Jay, Couric became an advocate against cancer and even co-founded the Stand Up for Cancer charity.

The mother of two, Katie, met John Molner in 2012 through a mutual friend. Katie claimed that it was love at first sight, "What can I say? Molner had me at hello." Former CNN and Banker tied the knot on June 21, 2014, at Katie's home in Easthampton, Newyork.

Previously in 2013, the pair announced their engagement. Katie told Access Hollywood that her daughters were surprised when the lady heard that she was getting married again. Now, the couple is happily married and shares strong bonding.

The 23-year-old is blessed with an elder sister, Elinor Tully Monahan, who was born on July 23, 1991. The sisters are pretty close to one another despite sharing the 5 years difference. Besides, Ellie, 27, is now engaged to boyfriend Mark Dobrosky.

As per Katie's statement, two sisters look like their father, Jay. She stated:

"They both have my chin, and I think they really are a combination," Couric told USA Today in 2013. "But I sure see a lot of Jay in them. I see a lot of Jay in Carrie in some of the expressions she makes. They're just like his. It's uncanny. She's my mini-Jay."

Nevertheless, the beautiful siblings are big fans of the Comedy Central show, Broad City. Both also appeared at a "Got Milk?" television ad that was revealed during an episode of her mother show, Katie talk show.

Monahan has just begun her professional career, and she is on the verge of making it big. So, she still depends on her mother, Katie Couric, for a living who has an impressive net worth of $75 million. Katie is one of the well-known American journalists who started her career as an NBC reporter in 1989.

Besides, mama Couric is an author who wrote several children's books such as "The Blue Ribbon Day Katie Couric" and "The Brand New Kid". On the other hand, her step-father John is an American business executive who has a staggering net worth of $20 million as of 2019.

Caroline recently completed her graduation from Columbia University in journalism on May 23, 2019. Also, she completed an internship in Paris in 2016 and taught English to young children as well.

Additionally, Monahan contributed essays to the West Magazine and was Stanford's chief recruitment officer for Kappa Alpha Theta. In the summer of 2016, she also interned for Ark Press, doing work for an episode of PBS American Experience and a miniseries called The Gene.