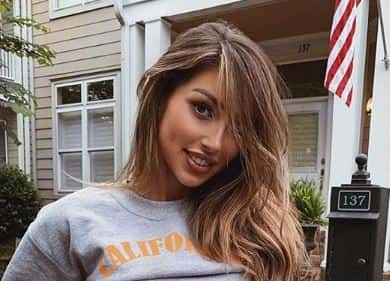 The beauty icon, Caroline Einhoff is one of the popular names in the glamour industry. Widely known as the fashion, beauty, travel, and fitness blogger, Caroline has been one of the influential personalities in today's era. She has her own website named ItsMeCaro which later gained huge popularity after she gained her fan following in her official Instagram account.

German native, Caroline was born on 26th April 1991. Currently, she is almost thirty years old and her birth sign is Taurus. Previously she tried modeling for various brands due to the parent's recommendation. But later after knowing her passion, she enjoyed her career as a makeup artist and personal trainer.

Here, she is now, a successful model, trainer, blogger, and social site influencer. Now, let's know more about the gorgeous and talented Caroline.

Is Caroline Einhoff Single or Married?

Caroline has been listed as one of the most searched names on Instagram and other social sites. So, many people are wondering whether she is single or dating anyone? Hence, the glamorous beauty, Caroline is single at the moment.

Though previously she has been highlighted in media due to her many affairs in the past. But as of now, she isn't involved in any sort of dating game. Furthermore, she is highly devoted to her wonderful career by achieving a huge amount of success. So, that might be some of the reason she is currently single.

Moreover, she loves hanging out with her family and friends in her leisure time. Mostly she is seen vacating with her younger sister Sandra Einhoff. Recently they are seen working out together in their quarantine period.

Twenty-nine years old, Caroline has been involved in many relationships in the past. But one of her most highlighted relationships was with the model, Jeff Kasser. Jeff who is a Nashville based model is one of the successful people.

In 2009 he was featured in a Hannah Montana episode. Also, he has been cast as a leading man in the music video of Just a Dream and All American Girl which are songs of singer Carrie Underwood. Caroline and Jeff's love life began back in 2017. Due to a common interest and the same working environment, they soon started dating.

After enjoying almost three years of togetherness the pair got finally separated. Neither of the parties has broken the silence regarding the reason for their separation. Hence, they even have erased all of their traces of one another from their particular social sites account.

Caroline Einhoff Net worth and Earnings

The impressive personal, Caroline has a net worth of $500,000. Which hasn't been officially confirmed yet? But being one of the tops in the list her fortune might fall in a similar range.

As involved in various works and fields her estimated annual income is between, $200,000 to $300,000. Her Instagram her over 1.5 Million followers at the moment.

Similarly she and her friend, Luisa Christell own an online shop name Calua. As of now, Caroline is enjoying a quality lifestyle in a lavish way.