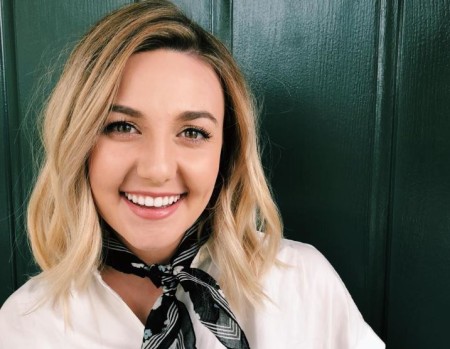 American news reporter, Caroline Peterson is famous for her news coverage at the CBS-affiliate news network, WMTV NBC 15. She is also the former morning News anchor at the television station, KOMU-TV. Other than that, she loves to listen to music while she was outdoor and trying out new foods at new places.

Caroline was born in Southern California, United States, and belongs to white ethnicity/race. More to that, she is an American by nationality. Besides, she is a married woman. Find out more of a glimpse of Peterson's personal life in the below.

News reporter, Peterson has tied the knot with an American rock county reporter, Adam James Duxter. The two united as husband and wife on 22nd August 2019 at Oak Glen, California.

During the time of their wedding ceremony, the bridegroom was perfectly dressed. Adam was in a slim business suit with a blue, dark pattern, while Caroline wore a Lace Petite Wedding Dress with Pleated Skirt.

Their nuptial was the best day for the wedding couple where all of their friends and family relatives wished them for a happy married life. The pair is enjoying the most joyful moments of their life but yet to welcome a child.

How Did The Couple Met First?

The married pair are the college sweethearts who met for the first at the University of Missouri in 2014. At their college time, they both were in a different class, which was the class of journalism.

Adam once said that he was finding a true friend during the freshmen's year, and later, he interacted with Caroline in a lecture hall. At that time, he only said "Hello" to her and moved out of her way.

The duo further met in a class of sociology in a large lecture hall where Peterson was sitting in the front of the row, and Adam was sitting backward. After the class ended, Adam asked her to walk with her but she often questioned is it cool if her boyfriend also joins them?

By the end of their freshman year, the two talked about liking each other and considered to be more than friends. But, in response, Adam said we are just good friends, but Caroline said no and interrupted him by saying an idiot to Adam. Shortly they later became lovers and got engaged on 31st August 2018.

Caroline Peterson has a net worth of $250 Thousand as of 2019. She makes a decent income from her notable reporting. According to LinkedIn, the average salary of a news reporter at WMTV NBC 15 is $46,100. So, she might be earnings somewhere to that.

As a news anchor, Peterson worked for the NBC/CW owned news channel, KOMU-TV, which received highly acclaimed reviews from the views with Caroline. Just like her, Frances Rivera and Richard Lui also grabbed the attention in the field of news.

Following the Passion of Reporting

American newscaster, Peterson started working as a barista for the coffeehouse chain; Starbucks, in July 2013. While there, she bringing joy in the faces of her customers, providing excellent coffee services, and making foods as well as beverages.

Caroline later joined the leading strategic fundraising company, Ruffalo Noel Levitz, as a student caller in September 2015. She took the responsibilities of calling alumni and linked persons of the University of Missouri-Columbia from where she graduated.

Peterson further enrolled as an intern at the multi-platform US-based sports news broadcasting media, FOX Sports, from May to August 2016. She then served as a news intern at the NBC 7 San Diego network in 2017.

Caroline also worked as a production and desk assistant for the virtual and digital channel, KOMU-TV, in January 2016. After serving for two years as a news anchor, she led the channel as a news producer in 2018. Currently, she is reporting for the news broadcasting media, WMTV NBC 15.