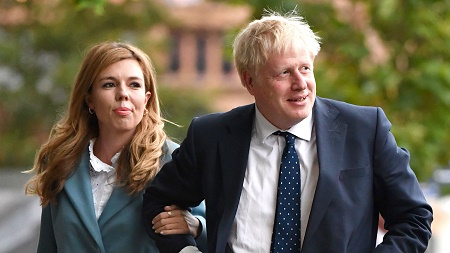 On Saturday, May 2nd, the new mom, Ms. Symonds revealed her son's name by Instagram sharing a picture of herself carrying an infant. She said that she “couldn’t be happier” and that her “heart is full”, continuing, “Introducing Wilfred Lawrie Nicholas Johnson born on 29.04.20 at 9 am".

The newborn Wilfred, now eight days older, was named as a tribute to Johnson's grandfather Wilfred, and Carrie's grandfather, Lawrie, according to the post. She also stated that Nicholas was chosen after the two doctors, Professor Nick Hart and Dr. Nick Price,  who save the life of Mr. Johnson during last month's battle with the pandemic diagnosis.

And Ms. Symonfs also thanked midwives and staff at London University College Hospital (UCLH) stating: "Thank you so, so much to the incredible NHS maternity team at UCLH that looked after us so well".

"I couldn't be happier. My heart is full."