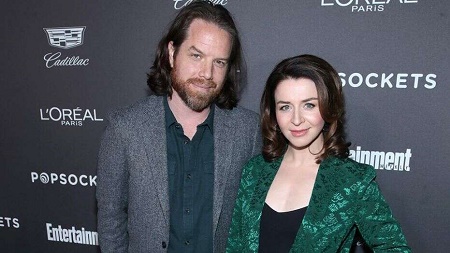 Caterina Scorsone and Rob Giles are getting it done. The Grey's Anatomy star, Scorsone, and her musician husband of ten years, Rob have formally divorced on Friday, May 8 after more than a decade of the union.

" They remain friends and are committed to co-parenting their kids in a spirit of love", according to People's statement. But they already started living separately since March 1 before making it official. And the actress cited irreconcilable differences as the reason for their division.

Similar to Caterina, other celebrities like Christina Hendricks and Kristin Cavallari also separated from their partner this year. The starlet who starred as the main character in the Lifetime crime drama series Missing posted a poem written by Morgan Harper Nichols on social media, just hours after People magazine reported their division.

“Cling to joy. Bold audacious joy, that looks for Light in everything. Even when you’re waiting".

The 1.62 m tall, Scorsone, and now-divorced husband, Giles walked down the wedding aisle on June 27, 2009, at an intimate ceremony. The two have three children together, daughters Eliza, 7, Michaela, 3, Paloma "Pippa," and 4 months, Arwen.

Their youngest a little baby girl Arwen has arrived recently in December 2019. The mother of three children, posting a cute family picture of cuddling up the newborn with her big sisters, confirmed the birth of the third baby on Instagram.

"Arwen is here! Our family wishes you a happy new year, a happy new decade, and a happy heart made new by love in every exquisite moment".

Along with this, she also revealed that her family dedicated Arwen's middle name to go: "Lucinda, 'Lucky' for short." In addition, the second-born daughter Paloma, 3, was previously diagnosed with Down syndrome.

It's Over! Kristin Cavallari and Jay Cutler Announce Their Split