Celebrity weddings postponed due to Covid-19 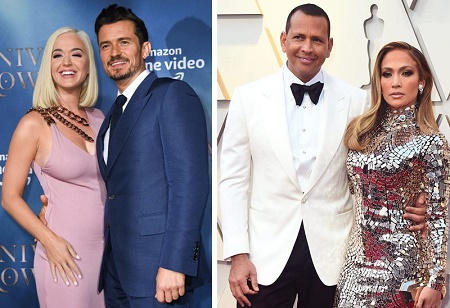 The COVID-19 pandemic has triggered many Hollywood weddings around the globe to be canceled or postponed. So far, it has forced many engaged couples who had planned their weddings between March and December 2020 to reconsider their plans.

Here is a lists of celebrity couples who put their nuptials on hold until because of the coronavirus pandemic. So we can only hope that the marriage lineup for 2021 will be something different.

Academy Award actress, Emma Stone would have been married by now. She and her fiance Dave McCary, who were engaged in December 2019, were reportedly set to tie the knot in Los Angeles in mid-March. However, due to the pandemic, they had to keen hold of their wedding and fix a new date. No new date has yet been set by now.

The mom to be Katy Perry and fiance Orland Bloom, 43, who was planning a summer wedding in Japan was delayed after. "It was all set with 150 guests for Japan. The singer was delighted to walk down the pregnant aisle, "a source told People magazine. “They were both so elated that all the wedding details were finally coming together, but they are hitting pause because of coronavirus" a source added.

Princess Beatrice, 31, and Edoardo, 37, who had enjoyed their engagement in Italy in September 2019 originally intended to have their wedding reception on April 16 at Buckingham Palace. But for a third time, the event was postponed and this time is due to the coronavirus outbreak.

First, the pair had to delay their nuptials because of the controversy involving the relationship between Beatrice's father Prince Andrew and Jeffrey Epstein. They agreed to marry at the Chapel Royal in St James's Palace for the second time, but as per Insider, she and her fiancé must weigh their options to "avoid taking any unnecessary risks in the current circumstances"

For now, the engaged couple is holding their scheduled May 29 Wedding in St. James' Palace.

Actress, Jennifer Lopez and her sweetheart, Alex Rodriguez has put on hold their marital vows because of the COVID-19 outbreak. On April 7, Jennifer told Ellen DeGeneres: "We will see what happens now. Honestly, I really don't know what's going to happen now as far as dates of anything like that."

"We're kind of just in a holding pattern like the rest of the world," she also says Ellen. "Again, it's just something we're going to have to wait and see in a few months how this all pans out",  she added. The two who engaged on March 9, 2019, have never reported their announcement of their final date, but Us Weekly said it has been scheduled in Italy for this summer.

Allegedly, Taraji P. Henson, 49, and Kelvin Hayden, 36, decided to marry in April but eventually moved their arrangements to June because of the Taraji insane schedule of work. But now it looks like their plans are again being postponed due to coronavirus. "It's probably going to be more like July. We have to see what this will be like at the other end", the actress told Extra on March 31 Tuesday.

The Hustle & Flow alum added: "Our grandparents, my grandmother is about to turn 96, he is 86, how do we get them to the wedding now? Now, we are concerned, just trying to figure out the safest and best way."

Problems about the coronavirus pandemic caused Dennis Quaid, 66, to pause his wedding to Laura Savoie, his 26-year-old younger fiance. This engaged couple was scheduled to walk down the aisle on April 4, at the home of Craig T. Nelson in Kauai, Hawaii. But, they called off. "We postponed once we started to hear about Italy…We have a few members of the family and friends who have low immune systems due to medical treatment, medical issues going on. We decided, ‘Let’s just postpone", the Breaking Away's star told People.

The head coach of the Women's NBA's Los Angeles Sparks has postponed his marriage with his fiance, Gloria Govan. The pair who engaged in 2018 after 3 years of romance didn't walk down the aisle as expected In the first week of April 2020. Bride to be Govan, 35, says on People “We just felt like it was in everyone’s best interest, really.”

Matt Barnes' ex-wife adds, “So we were like, ‘Yeah, it’s just probably best to postpone.’ We had a few people traveling, a lot of our parents and aunts and uncles who are a little older. So we felt like it was in their best interest, and for everybody, to just not put anyone at risk. It was obviously a really crappy decision to have to make.”

The couple, Ava Daza and Luch Zanirato had decided to postpone their wedding amid the COVID-19 pandemic. Their marriage was actually scheduled for May 2020, but they had to push the ceremony and postpone concerns regarding coronavirus. Gloria Diaz's daughter Ava says, “It doesn't bother me much cause we get to extend this chapter and I still end up with you my love.” The pair already had married in a civil wedding on January 7, 2020, at the Manila Polo Club.

Yes, the twelfth season of The Bachelorette stars' JoJo Fletcher and Jordan Rodgers are picking a new date to exchange vows. Since getting engaged in 2016, they were supposed to marry this summer but may have other plans for the coronavirus outbreak. A real estate developer , 29, said on "party date" Instagram Live hosted by Chris Harrison and Lauren Zima that the viral outbreak has prompted them to consider delaying their wedding.

American football quarterback, 39-year-old Rodgers also said the health of guests in marriage is important. "We don't want people to be worried about traveling around it, so if there is that, then we'll look at possibly rescheduling to next year even though that's not what we want to do" he added.

Former "Real Housewives of Orange County" star Vicki Gunvalson and Steve Lodge's wedding date could be moved to 2021. The two decided to get married in April after they got engaged in April 2019. However, they've been forced by the coronavirus pandemic to postpone their forthcoming wedding.

On Monday, the businesswoman posted a picture of her and her fiance on Instagram, capturing that along with a broken heart and tearful emoji and wrote: "I have called off the wedding." Also, she said to People, "I'm not in the right mindset" adding that the couple is in no hurry to get down the aisle now.

Television celebrity, Sammi Giancola adds her name to the list of celebrities that have postponed their ceremony due to the pandemic of the ongoing novel coronavirus (COVID-19). In September, she and her fiance Christan Biscardi were expected to tie the knot, but they put wedding stuff on hold until the pandemic had ended.

After two years of dating, Giancola, 33, and Biscardi revealed their engagement on Instagram in March 2019.

The Real Housewives of New York City star Tinsley Mortimer is now in a holding pattern over her marriage to Scott Kluth, a CEO, and CouponCabin manager. The pair who had planned for a wedding in Japan will be scrapped due to the coronavirus pandemic. She tells E! News, "It's definitely difficult in this time to plan something and really nail it down. So we're kind of just waiting to see what's going to happen with the world".

The Bravolebrity, 44, added: "I'm older, you know, it's like different. I mean, I still want to wear a big white dress. Like that is not being taken away from me, I will wear a big huge white dress, but it's not going to be her big Southern wedding the way that I had before".

Coronavirus concerns may just extend Stassi Schroeder and Beau Clark's one-year engagement even further. Vanderpump Rules' alums who was engaged in July 2019 has his wedding on hold. The couple was planning an intimate wedding in October in Rome, Italy, but that may not proceed because of COVID-19.

The reality TV personality, 31, on March 26 announced the nuptials are set to be delayed or changed.  "So planning a wedding that may be nonexistent is fun. Def recommend," she tweeted.

Lala Kent and her producer fiance Randall Emmett have called off their wedding. In March, the Vanderpump Rules couple pair revealed that they had postponed their wedding until the summer, which was set in Newport Beach, California, on April 18. They claimed on People: “We have decided to move the date of our wedding to July given the unfortunate circumstances of what is going on".

Lala, 30, also shared a note with a touching post on Instagram's story.  “To the Future Mrs. Emmett,” the note read. “These flowers are a celebration of what is to come soon in our July wedding and the blessing that we will become one. I love you more than any words could ever describe. My heart is full of love because I have you. Love, Your Future Husband.”

Another celebrity couple to postpone their wedding plans is News anchor Hoda Kotb and her fiance Joel Schiffman. The couple who has been together since 2013 had planned on tying the knot in a beach wedding might have to wait a bit longer. And broadcaster, 55, said postponing their big day was "small potatoes" compared to what others had been through.

The TODAY co-anchor said on People that she and Joel are planning to move back their wedding due to the coronavirus epidemic. Hoda, 55 said: "We are literally about to push the button on the save the dates just because ... we kind of have our reservations, we know what we want to do, but who’s to know if it’s going to need to be delayed? So Joel and I have been discussing it".

The English entrepreneur, James Middleton and his fiance, Alizee Thevenet, have agreed to delay their wedding. They are said to have arranged a  marriage on 29 May at The Chapel Royal, St James's Palace but have now decided to put back their plans after the pandemic.

"It's very sad, but it's just not practical to hold it in this crisis," some sources told Daily Mail.  "Holding an Anglo-French wedding is impossible in the coming months and is still likely to be difficult in the summer."

Billy Joel and Christie Brinkley's daughter, Alexa Ray Joel confirmed that she had not set a date to marry her fiance, Ryan Gleason but the couple was planning to get married in 2020. Alexa had also planned her wedding to be musical with her parents playing a major role in her big day.

Now, all planning process has come to a halt, following the coronavirus outbreak. Mother, Christie said in an interview with Extra that Alexa and Ryan are putting their wedding on hold. "That's all on hold right now," she said.