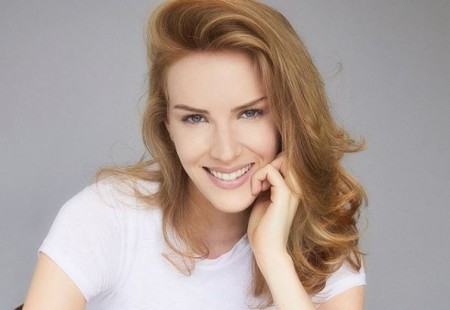 Charlotte Kirk is a British-born Australian actress and writer who is known for multiple scandals besides her acting career. She has appeared in only a handful of movies like Seduced and Abandoned (2013), How to be Single (2016), Ocean's 8 (2018), and The Reckoning (2020).

Charlotte Sophie Dyke was born on June 16, 1992, in Kent, England. She was born to father, Arthur Dyke and mother, Angie Kirk. While attending the Italia Conti School of Acting, Kirk worked with The Miskin Theatre and Jigsaw Performing Arts. Later, she appeared in commercials for Nintendo Wii and UK Orange Telecom.

The 28-year-old actress is engaged to the 50-year-old, Neil Marshall, a British film and television director, editor, producer, and screenwriter. They first met during the 2017 production of Hellboy. Neil has directed some episodes of Game of Thrones and Westworld.

It is not known when Charlotte got engaged with Marshall. As of now, they are yet to be engaged. Further, Neil himself found to be a part of a major scandal involving Kirk and major top personalities.

The Ocean's 8 actress made major news headlines when her multiple affairs with film and television executives became public. Let's start from the beginning. In March 2012, Kirk was introduced to the head of Millennium Films, Avi Lerner.

As per Kirk, Avi invited to her house and was forced to perform oral sex on him. She said Lerner promised her movie roles for sexual exchange. Kirk said in June 2012, she met producer Brett Ratner and he promised her film roles in exchange of sexual favours.

Kirk became involved with former NBCUniversal vice-chairman, Ronald Meyer in late 2012. At the time she was 20. Afterwards, Charlotte then had a sexual relationship with Australian billionaire, James Packer. Likewise, from 2013-2014, Kirk had an extramarital affair with former Warner Bros. CEO Kevin Tsujihara.

Charlotte was cast in the 2013 movie, Nicole and O.J. directed by Joshua Newton. Later, he described Kirk as his girlfriend. As of now, she is engaged to Neil Marshall.

Sexual Affairs and its Consequences

In 2019, Kevin Tsujihara resigned as chairman and Ceo of Warner Bros, while Ron Meyer stepped down as vice-chairman from NBCUniversal. Charlotte alleged that both men promised her to gave major roles in films in exchange of sex. However, an attorney who represents several high-profile executives said Kirk's accusation was merely a multi-million dollar extortion plan.

In 2019, Charlotte said she became an outcast in the movie industry in addition to becoming unemployable. On the other hand, she has been accused of extorting huge payments from Hollywood's power players. So, what is the exact story? Did she used sex to get roles in the industry or did the powerful men used her?

Charlotte has claimed multiple times that due to her Asperger's diagnosis she is vulnerable to being abused. However, some court filings stated that she agreed to a $3.3 million settlement in August 2017 with Ratner, Packer, Lerner and Tsujihara for her silence. Several renowned actresses in Hollywood including Ashley Judd and Lina Esco have been sexually harassed.

There is no exact information about Charlotte Kirk's fortune, however, her net worth is no less than $2 million. Although she hasn't received any big paychecks from acting, Kirk managed to get a heavy amount from her allegations. She appeared in a few successful movies which collected an excellent revenue at the Box-Office. Here, take a look: