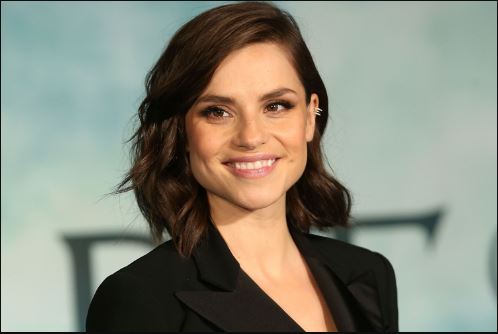 An English actress, Charlotte Riley is known for her roles as Catherine Earnshaw in ITV's adaptation of Wuthering Heights (2009) and as Sarah Hurst in Easy Virtue (2008). Moreover, she portrayed the role of  May Carleton, a wealthy widow who owns racehorses in TV series, Peaky Blinders ( in seasons two and four), alongside an incredible cast including Cillian Murphy,and Helen McCrory.

The star was born on 29 December 1981 as Charlotte Frances Riley in Grindon, United Kingdom. So far, she holds English citizenship and belongs to the white ethnicity. Attending at Teesside High School, she graduated from the St Cuthbert's Durham University in English and Linguistics.

Well, one of the Hollywood cutest couple Charlotte and Tom have been happily married to one another since they walked down the wedding aisle privately in July 2014. Likewise, they were pronounced as a wife and husband in the south of France at the 18th-century castle Chateau de Roussan in front of their loved ones.

As a Mother of Two

World Without End's star welcomed her firstborn child in October 2015 along with actor, Tom. The acting duo again welcomed their second child, or son, together in December 2018. This couple, according to The Sun, named their second-born child Forrest after the favorite character of the actor's movie, Forrest Gump.

However, the private couple, Riley and Hardy rarely spills any beans about the names of their little ones till date to the media or public. Aside from having babies, they had two rescue dogs named Max and Woodstock.

One with whom Hardy featured in a PETA advert to encourage the adoption of pets. But on 5 June 2017 the dog, Woodstock died from a violent case of polymyositis.

How did Charlotte meet her Future Husband, Tom?

Charlotte met her current partner Hardy for the first time on the set of a British television adaptation of Wuthering Heights in 2009. Then after a year, they had announced their engagement in the year 2010.

Before marrying Charlotte, an English actor, and producer, Tom was previously wedded to producer Sarah Ward in 1999. But later the exes got divorced in 2004 after 5 years of nuptials.

Then after, 42 actors, shortly dated his partner Rachael Speed, whom he met on the set of The Virgin Queen in 2005. Aged Tom shares one son Louis Thomas Hardy, 12 (born 2008) with ex-girlfriend, assistant director, Rachel whom he parted the ways in 2009 after four years together.

How Much Net Worth Charlotte Riley Does Enjoys?

Charlotte Riley is an English film and TV actress who enjoys a net worth of $8 Million as of early 2020. As the regular cast of many hits shows including The Take and Easy Virtue, Riley has become a well-paid actress in the United Kingdom. Thus, she might be paid which is the average salary of the British actress.

On the other hand, Riley's partner Tom Hardy maintains a good amount of fortune throughout his acting profession as an actor. His staggering worth is around $30 Million as of 2020.

Some of his best film roles include RocknRolla, Bronson, Inception (for which he won the BAFTA Rising Star Award), Warrior, Star Trek: Nemesis, This Means War, The Dark Knight Rises and among others.

For further updates on Actors of Peaky Blinders cast, then stay tuned to Married Celeb!!!