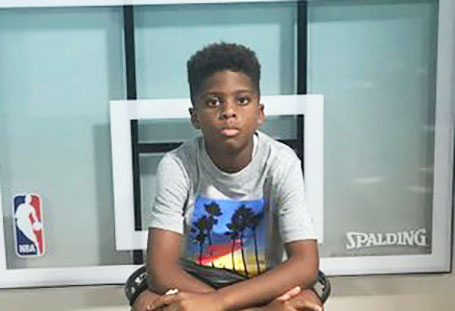 With an Instagram account at his name, Chris Paul II has achieved fame quite earlier than the rest of the celebrity kids. He is the son of NBA player Chris Paul who has embraced two Olympic gold medals and is NBA All-Starr Game's Most Valuable Player.

Christopher Emmanuel Paul II was born on May 23, 2009, to Chris and his wife Jada Crawley. But he is not the only kid in the family. Chris junior has a younger sister Camryn Alexis Paul born on August 16, 2012.

Chris Paul has embarked on sports and also plays with the school's basketball team. Similar to Chris junior Christina Schwarzenegger is also gained fame due to celebrity parents.

Scrolling through his Instagram posts, Chris junior seems to have built a great relationship with his school buddies. Moreover, he regularly attends any sports events with his best friends.

Unlike typical schoolboys of his age, Chris has got what it needs to be famous and popular. Aside from attending sports events with his dad, Chris also loves to spend time with pet animals. He is still in his teenage years and so far, there is no hint of his relationship status.

Born Before his Parent's Marriage

Chris's parents first met each other at Wake Forest University's basketball tournament. They were reported to be officially dating from 2003. Since then the couple is always at each other's side. Their happiness knew no bounds when they welcomed their first child Chris junior in 2009.

When Chris junior turned two years, his parents finally decided to walk down the aisle. They married in a private ceremony on September 10, 2011. The couple's family and intimate friends were there to witness the ceremony. Just a year later in, Jada gave birth to their second baby girl Camryn.

As the son of the highest-paid NBA player, Chris probably spent a spoiled childhood. His father owns a huge net worth of around $120 million. Chris's dad is known to make $24 million in a year. Therefore, Chris junior and his sister Camryn live a lavish life.

Chris once lived with his parents in Bel Air mansion which his dad bought from Canadian pop-star Avril Lavigne for $8.495 million in 2012. The house boasted a swimming pool with a huge lawn area all around. More to that, it had tall shrubbery all around for privacy. In 2017, Chris's parents sold the house for $8.7 million.

Take a look at Chris Paul II's funniest moments with his dad:

A year later, Chris and Jada bought a Mediterranean mansion located in Houston for $6.9 million. The house-made with French imported clay roof tiles stands in 10,000 square foot property. It stands beside the limestone-edge pool and comprises five bedrooms and nine bathrooms.

Recently, the NBA star had listed his Houston house for sale for a staggering $8.3 million. The couple is also extra cautious when decorating their kids' bedrooms.

While little Camryn might have a cute bedroom of her own, Chris junior has more than that. One of his bedroom walls features a mural painting that depicts a crowd in Staples Center. The beautiful mural also has Beyonce and Jay-Z painted on it.