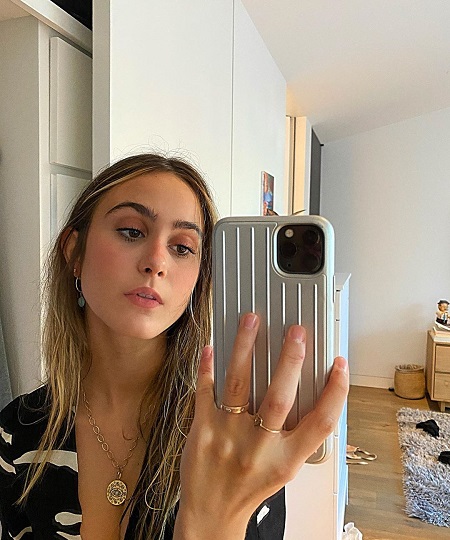 An American Instagram Star, Coco Arquette is widely known as the single daughter of former Hollywood duo Courteney Cox and David Arquette. Her mother Cox is a famous actress who is best known for her role Monica Geller on the NBC sitcom Friends from 1994 until 2004. Her dad David is an actor and director who is known for films like Wild Bill, Eight Legged Freaks, Scream series, etc.

Coco Riley Arquette was born on 13 June 2004 in Los Angeles, California, United States. She is the eldest half-sister of Charlie West Arquette (age 6 years) and Augustus Alexis Arquette (age 3 years). Her grandparents are Richard Lewis Cox, Brenda Denaut, Lewis Arquette, and Courteney Bass. So far, she holds American citizenship and is of mixed ethnicity. For her education, she is now studying at Private Elite School.

Since her parents' separation in 2013, Coco has been living along with her mother in Los Angeles, California. Similarly, Jennifer Aniston's goddaughter Coco is not active in any dating games at the moment. Thus, for now, she is quite busy with her studies and also loves to do playing the piano, making tiktok videos with her friends.

On the other hand, her mom, Cox, and dad, David are still in amicable terms, telling they remained best friends. Recently, on Coco's 16th birthday, her parents shared a throwback pictures with Coco Riley on Saturday, June 12, 2020, on their Instagram account.

When Her Parents' David and Courtney Got Divorced?

As we all know, Coco's parents are no longer together. They were married from 1999 until 2013. It means they had enjoyed their matrimony for about fourteen years.

The divorced couple first met during the filming of the movie Scream in 1996. But before that, they initially met at a pre-party. Exactly, it wasn't love at first sight for them. Suddenly, they fell in love and started dating after working together on the same screen.

On June 12, 1999, Cox, 56, and Arquette, 48, tied the knot in the private ceremony. The function took place in San Francisco at Grace Cathedral. Five years later, they welcomed their daughter Coco in 2004. Following the birth of her child, Friends' star went through postpartum depression.

However, it was announced that the couple had parted their ways on October 11, 2010. Two years later, the fashion designer David for divorce in June 2012. Finally, their divorce was finalized in May 2013.

Her Parents' Both Found New Loves

Yes, it is very true.  After the separation, Arquette weds his girlfriend, 39- year-old Christina McLarty, an Entertainment Tonight correspondent. The lovebirds got hitched on April April 12, 2015, in Los Angeles in front of family and friends.

Their 11-month-old son Charlie West and David's Daughter Coco also attended the party. From their union, they are blessed with two sons Charlie (born 2014) and Augustus (born 2017). On the other hand, shortly after her split from Arquette was ended, the 1.65 m Cox started dating Johnny McDaid, an Snow Patrol guitarist in late 2013.

Six months later, they became engaged on June 26, 2014. However, their engagement was mysteriously called off in the year 2015. Even after the breakup, the former fiances are stronger than ever. For now, they are no longer engaged but they are just together.

Currently, Coco Arquette is yet to start her own professional career. But still, she lives a very lavish lifestyle born to wealthy parents. Thus, presently, she has no source of income. Further, she has 329k followers on her Instagram account.

When it comes to her mom, Courteney Cox 's net worth, it is around $150 million as of 2020. She has acquired her entire wealth from her acting and producing career. Also, she makes extra money from her production company Coquette Productions. As per her salary, she made around $88 million alone from her role on Friends' 10 seasons.

But she received $22,500 per episode in 1st season and was paid $1 million per episode in the final two seasons. On the other hand, Coco's dad, David now enjoys the worth of $25 million, which he has earned as an actor, film director, producer, and screenwriter. Further, Cox and Arquette listed their massive Beverly Hills mansion for $20 million after their divorce.