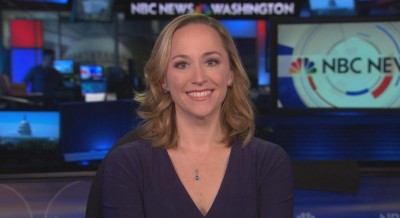 Recently, Kube starred as a NBC News National Security and Military Correspondent on the talk show, Today. So, is she dating anyone or she is single? Who's the perfect match to be her life partner?

Courtney Kube was born on July 28, 1978 in the Washington D.C., United States. Moreover, Kube belongs to Caucasian white ethnicity and her nationality is American.

From a very young age, Kube had a keen interest in reading and writing. Later, she found her true passion in broadcasting news. After graduating from college, she decided to pursue her career in the field of television.

Courtney Kube started her career as a television producer of NBC News Special: The Funeral of Ted Kennedy in 2009. Later, she produced the NBC Nightly News with Lester Holt, where she worked with Kristen Dahlgren in 2014.

Courtney Kube made her debut as a correspondent in the American news talk show, Morning Joe in 2017. Furthermore, she appeared as a national security reporter for MSNBC Live network in 2018.

Kube also worked as a panelist in the news talk show, Hugh Hewitt in 2017. She then starred with Tim Ciesco and Jacelyn Reeves in 2019. Similarly, her other television works are Velshi & Ruhle, Weekend Today, and many others.

Courtney and her husband, Eric Dent tied the knot on October 12, 2013, in Chevy Chase, Maryland. Moreover, they celebrated their wedding ceremony with their family and close relatives.

In their wedding ceremony, she wore a half sleeve wedding gown while her spouse donned a military costume.

The couple are childhood sweethearts. The duo first met while studying in The Ohio State University.

Upon graduation, the duo expressed their love for each other. Later, they started sharing their company and became lovers. After spending quality time together, they engaged in 2012.

Kube's husband Eric is an American spokesperson and communications director of Fincantieri Marine Group. He formerly served for the corps as the Marine Lt. Col. for more than 30 years.

Courtney Kube and her partner are blessed with twin kids, both sons.

First of all, the pair revealed at the beginning of 2014 that they are expecting their first child.

On the occasion of Christmas Eve, Kube gave birth to their twin children, Ryan Michael and Jackson "Jake" Robert in December 2014 in Chevy Chase. The due date for the birth of child was Dec 12, 2014.

She was chosen the supermom on the basis of how she contributed her time to raise her twin sons while her husband Dent was serving in the marine.

"I nominate super mom Courtney Kube – she’s the mom of infant twin boys Jake and Ryan and wife of a Marine. I know how hard it was for me, mom of ONE boy, to balance returning to work and caring for my child….so being able to do it for TWO beautiful boys is probably more than twice as hard."

"It’s so difficult to make sure mom gets in the pictures, so it would be great if she had professional pictures to look back and remember this fleeting time with her boys. The days are long but the years are short – take pictures of them! There aren’t many [photos] of her with the boys on Facebook for me to borrow…but I think she’d love professional pictures, especially with how hard it is to remember to smile when you’ve got so much on your plate!"

Julie Kubal, a child and family portrait artist and photographer serving Washington DC of the Julie Kubal Photography wrote in a statement.

Courtney Kube's wealth is estimated to be around $1 Million as of 2019. She earns a lucrative salary in the range of $250 Thousand to $300 Thousand yearly.

Kube also receives an extra income from her other works which include advertisement, endorsement deals, etc.

Similarly, Kube's spouse has a bank balance of $2.5 Million. He served more than 30 years in marine as Lt. Col and is currently a spokesperson and communications director which has been the major source of his earnings.