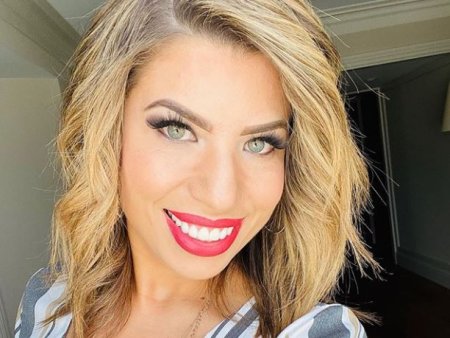 Cristina Servin is best known as the longtime wife of former UFC Lightweight Champion, Tony Ferguson. Servin prefers to stay behind the spotlight despite her husband is a globally known star. Previously, the celebrity wife worked as a model and has participated in the Mexicano Universal Jalisco, a beauty pageant in Mexico.

Cristina Servin was born on August 15, 1991, in California, the United States. The details about her family background are not known, but Cristina might have Mexican heritage. Her father is Manuel Servin. Further, she attended California State University.

The 29-year-old, Cristina Servin has been married to UFC Lightweight MMA fighter, Tony Ferguson since September 8, 2012. Their wedding ceremony took place a church in the presence of friends and families.

The pair hasn't disclosed any specifics about their history, but their relationship dates back to 2009. Further, Cristina and Tony got engaged in 2011 and became husband and wife the next year. Like Servin, Danny Pimsanguan is married to MMA fighter, Cody Garbrandt.

After four years of marriage, Cristina gave birth to their first child, a son named, Armand Anthony on April 28, 2016. Tony and his wife have seen a lot of ups and downs in their relationship. However, the pair has even grown stronger now.

On the occasion of their eighth wedding anniversary, Cristina wished her husband via Instagram on September 8, 2020. Likewise, her husband also shared a sweet message for his loving wife.

Cristina became the news headline when she filed a restraining order against her husband on March 14, 2019. She claimed that her MMA fighter husband developed uncharacteristic action such as extreme anxiety, not sleeping for days and tearing down their home fireplace.

Servin didn't file for divorce neither she reported about any physical violence. She argued that a precautionary measure was the restraining order to get him the necessary treatment for his mental state. Further, the restraining order case was closed on April 23. At present, the family is happy than ever.

The 36-year-old, Tony Ferguson is an American professional Mixed Martial Artist who currently fights as a Lightweight for the Ultimate Fighting Championship (UFC). Ferguson has a wrestling background and has also trained in boxing, Jiu-Jitsu, Muay Thai, and Wing Chun. He began his professional fighting career in 2008.

Tony is said to be one of the best lightweight fighters in UFC with the most consecutive wins in UFC lightweight division tied with Khabib Nurmagomedov. Nicknamed as "El Cucuy", he is a former UFC Lightweight Champion.

As a celebrity wife, Cristina Servin shares her husband's wealth. However, she is a businesswoman and is an independent woman. Meanwhile, her spouse's net worth is $2 million as of 2020. Zelina Bexander's husband, Alistair Overeem, another MMA fighter has a net worth of $10 million.

Besides his prize money, Ferguson also earns a decent amount of money from endorsement deals and sponsorships. Currently, he has sponsorship from RDX Sports and Monster. On the other hand, Servin hasn't disclosed anything about her business.