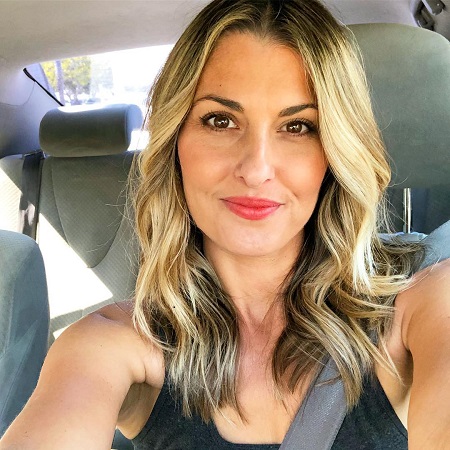 If you are loving watching Weather Forecasts, then Crystal Egger
must not be a new name. She is an American meteorologist who is working at virtual channel 4, KNBC in Los Angeles, California. Before that, she used to work with American pay television channels The Weather Channel, which was owned by the Weather Group, LLC.

She was born on August 5, 1979, in Grand Terrace, California, United States. She studied at the Terrace Hills Middle School and Colton High School. Later, she got her a B.A. in communications in 2000 from the University of California, Santa Barbara. So far, she holds American citizenship whereas her ethnicity is unknown to the media.

Married To Her Mysterious Husband

Egger, a native of Grand Terrace, California, is a married woman. She tied the knot with her long-term husband, whose real identity is unknown to the media. To date, she has not talked much about her partner to the media or any programs.

But the weather forecaster Crystal frequently shares photos of her family on her social media account. So here we've come to know from her recent July 2020 Instagram post that she's happily married to her unknown for 17 years. This means in around 2002 the couples tied the knot.

Further, Crystal who attended Mississippi State University's meteorology program is a proud mother of two beautiful daughters. But sadly still her kid's name still remains private. As per her Instagram post, her oldest daughter weighed less than 2 pounds at the time of her birth.

Now, the family of four resides at their home in Grand Terrace, California, United States.

How Much Net Worth Does Crystal Egger Have?

Working in the broadcasting field, Crystal must be making a decent amount of money. When it comes to her total net worth, it is assumed to be more than $500 thousand as of 2020. Her primary source of earnings is her own professional career working as a meteorologist.

Likewise, her salary is expected to fall around $72338 a year, which is an average annual salary in the United States for a meteorologist. As per Payscale, the NBC news employees make the average range from $42,366 to $147,649 a year. Thus, Egger might be making the same amount.

A career as a Meteorologist

Crystal, the 5 feet 8 inches tall initially started her hosting career by appearing on ITV Cable 16 in August 2004. Then she went to KIFI-TV in Idaho Falls, Idaho in 2006, where she worked as a lead weather anchor.

Egger then started working at KDVR in Denver, Colorado, where she served from 2007 through 2010. While in Denver, she covered the programs like 2008 Windsor, Colorado tornado.