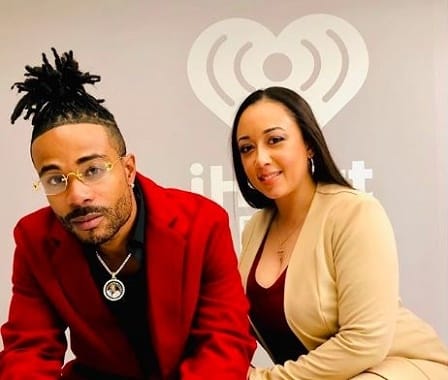 32, Cyntoia Brown-Long recently released from Tennessee Prison on 7 August 2019 after 15 years of imprisonment. And that was the same day she could able to embrace her husband, Jaime Lynn Long, known professionally as J. Long. Her husband, Jamie, is a singer and businessman, and CEO of JFAM Music, Inc.

Now Cyntoia Brown is a free woman and the highlight of Netflix's latest series, From Murder To Mercy: The Cyntoia Brown Stor released on April 29, 2020, on Netflix? Further, author Atria Books also published her 15-year prison memoir entitled Free Cyntoia: My Search for Redemption in the American Prison System on 15 October 2019.

Romance Started with a Love Letter

On October 17, 2019, Cyntoia and the R&B singer, Jamie recounted their unusual lovemaking on the radio show The Breakfast Club. The singer first heard of his future wife by watching a documentary called, Me Facing Life: Cyntoia's Story in 2011.

Grind with Me's singer then felt the spirit of writing a letter to her and the letter was submitted in January 2017. Surprisingly his love letter succeeded as he got a reply. "It was just something about him," Brown-Long said on MSNBC's 3rd Hour of the TODAY show.

Four months later, 34 year-old Jamie traveled to Tennessee to visit his future wife in custody. "When I went in to see her, I knew right then she would be my wife," he explained. During Q&A interview in 2019, Cyntoia also confirmed that Long had come into her life at a very low point.

"I met my husband in January 2017, and it was at a time where all my appeals had been denied. They give you three appeals in the state of Tennessee. You get your direct appeal, you get your post conviction appeal, then after you use all those appeals, you can petition the federal courts."

Two years later, they engaged in the year 19. The singer-turned-Christian artist explained: "I bought my wife's wedding ring while she was still in prison, and we didn't know if she was getting out,".

Got Hitched While Cyntoia Still in Prison

In August 2019, the news of Brown-Long's marriage broke alongside her memoir release, Free Cyntoia: My Search for Redemption in the American Prison System. Brown and Long, after 2 years of dating, actually got married by proxy while she was still serving in jail.

This indicates that at the exchange of vows, which actually took place by phone, someone stood in for her. According to the Tennessean: "Under Tennessee law, imprisoned persons who are in prison may apply for a marriage license to be married by proxy, which enables the parties to marry legally without

However before marring Cyntonia, Jamie Long, an musician and entrepreneur  was previously in marital life with his first wife, Pamela Long for six years. She is the singer of American girl group named Total.

And 42, the musical asrtist claimd that Long cheated her. She told Speak on the Neighborhood: "This man is diabolical and he is such a manipulator. The way this man pursued this woman is the way he did me".

Arrested at the age of 16

16, Brown-Long then shot and killed  Jonny, when they were in bed. She told police that she thought he was taking a gun out and that she was behaving in self-defense. She also claimed that a man named "Cut Throat" forced her into prostitution.

Her clemency was granted by Bill Haslam which is issued in August 2019.