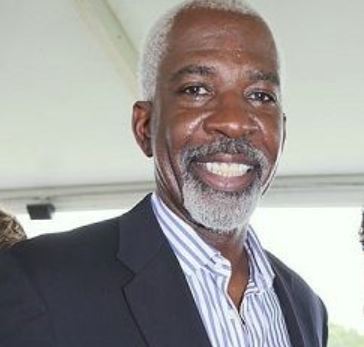 Dan Gasby is one of the known businessman and media executive who is popularly known as the husband of American restaurateur, model, author, TV host, B. Smith. Except for his wife's legacy, he previously worked as executive producer on CBS and later produced Smith's lifestyle show titled B. Smith with Style.

Dan was born on 10th March 1954 in New York City as Clarence Alvin Daniel Gasby. He has graduated from Colgate University and is the son of John Gasby, a former field-house manager at Stevens Institute of Technology and mother, Louise Gasby a homemaker.

His Current Relationship with Alex Lerner

Sixty-five-years-old, Gasby is maintaining a love relationship with Alex Lerner, a radio host. The pair met each other back in 2017 while hanging out at a bar in Hampton.

Since then, Gasby is together with Lerner while still taking care of his wife B. Smith. Smith suffered from Alzheimer's and recently died on February 22, 2020. As of now, the two of them are living happily in a very intimate relationship which is also approved by Dan's daughter Dana.

Previously Alex was married to a guy whose identity is still left to reveal. She shares three children Jacqui Lerner and the other two with her former spouse. Furthermore, she was highlighted to the media after taking care of Dan's wife who died of Alzheimer's disease.

Gasby and Barbara Elaine Smith both encounter one another on Valentine's Day at Smith's restaurant in 1992. At that period of time, he was aiming to support a locally owned African-American business and happened to face his future wife.

Within a first met the duo exchanged their contacts and Dan started to appear in her restaurant almost every day and their romantic relationship began.

After their closeness grew stronger, the pair decided to take their relationship further. Later the pair ended up marrying each other on 23rd December 1992. The two loving souls remained together for over twenty-seven years until Smith died.

Though the couple has been together for over two decades they don't share any children from their marriage. However, both of them accepted Dan's daughter, Dana Gasby from his first marriage as their child. Dana is currently Thirty-years-old and is taking good care of her mother's restaurant.

What is the Net Worth of Dan Gasby?

Gasby has estimated net worth of $5 Million, however, Dan hasn't revealed anything about his wealth. His late wife, B. Smith left a total fortune of $20 Million. So far, the news about who's going to inherit her net worth or it is going to charity, nothing is confirmed.

The former husband of Smith is a man of many talents, throughout the career he has been engaged in various fields of work. Previously, working as an executive producer for Essence Awards he earned over $100,000 annually.

Later as a senior vice president of marketing at Camelot Entertainment Sales Inc., he income went over $200,000 annually. He owns multiple restaurants in the US alongside his ex-wife B. Smith from which he gathers revenue over $1 Million annually.

Stay connected to Married Celeb for more biographies and gossips!!!