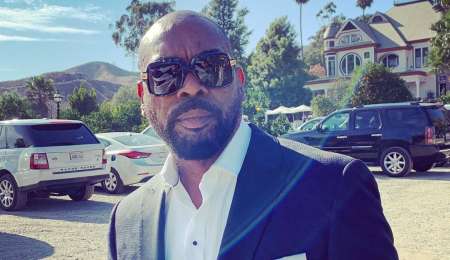 American actor, Daren Dukes is popular for his portrayal of a blind man in the thriller movie, The Hanged Man. He is also best known for his role as Kyle in the television comedy series, The Marriage Tour. More to that, he frequently features on a web series, The Dallas Cowboys Show since 2007.

Dukes was born in the United States of America and celebrates his birthday on the 22nd of June every year. He, moreover, hails from African-American ethnic background/race. Other than that, he is a married man. To know more in details about Dukes' personal life, read the article till the end.

American actor, Daren Dukes, and his spouse, Shanola Hampton are enjoying the most romantic moments of their married life. The two united as husband and wife on 11th March 2000 in an intimate ceremony.

On the other hand, Dukes' wife is an actress who came to prominence after playing the role of Flash in the comedy-drama series, Related. She also won a Grand Jury Prize Award for her performance in the movie, Things Never Said in 2013.

Shanola currently appears in a comedy-drama TV show, Shameless since 2011. She acts as the wife of Steve Howey, who's her on-screen husband, Kevin Ball. The on-screen couple was also rumored to be dating after Shanola shared a picture on Instagram, captioning Steve as her baby. But, the rumors turned out to be fake after they proclaimed that they're just good friends and adores each other as a cast.

Daren and Shanola are the parents of two adorable kids. The couple announced that they were welcoming a baby girl after 13 years of marriage on September 2013. The Los-Angeles-based pair later welcomed a beautiful daughter, Cai MyAnna Dukes on 20th January 2014. At the time of birth, Shanola was 36 years old.

After spending two years with their newly born baby, the couple welcomed their second child, Daren O.C. Dukes on 9th May 2016 in Los Angeles, CA. During the postnatal period, Dukes was seven lbs., six oz., and 20 inches long.

Daren Dukes has a net worth of $400 Thousand as of 2019, which is more than Massai Dorsey Sr.'s total fortune. He earns a subsequent salary from his profession. Similarly, Dukes' annual income might range in the same payroll of an American actor that is $56,582.

On a similar way, Daren's wife has a net worth of $1 Million aid through fruitful earnings from her professional works. Currently, she appears on the TV show, Shameless, where Zack Pearlman and Matthew McNulty also starred.

On the other hand, Daren's spouse also drives a Acura MDX car and is fond of traveling on her vehicle with her family on vacation. On 13th June 2019, she shared a picture of her Dukes' family spending quality time in Los Angeles County, CA, via Instagram.

The Los-Angeles based actor, Dukes made his debut appearance in Neil H. Weiss' thriller movie, The Hanged Man in 2007. He then featured in a short comedy film, Hot and Bothered, alongside Jenn Korbee, Chrishell Stause, and Adam Chambers, among others in 2012.

Dukes appeared as a regular cast in the comedy television series, Static from 2012 to 2013. He further starred as a truck driver in the mysterious comedy-drama series, Criminal Minds. He also guests appeared on many TV shows, including NFL Top 10, Hell's Kitchen, and so on.

If You're Passionate About Acting, and Interested To Know About Actor's Professional & Intimate Life, Visit Married Celeb!!!