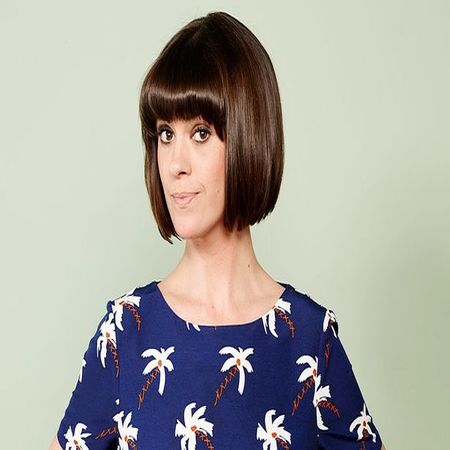 Dawn O'Porter is a British writer, director, actress, producer, and television presenter. Moreover, Dawn gained public attention for the first time when she attempted to slim down to a size zero by using drastic dieting for the BBC documentary Super Slim Me in 2007. Furthermore, she is also known for work on Torn (2010), Skins(2007), and My Breasts Could Kill Me(2009). Apart, she is also famous for her books and novels like So Lucky(2019), Diaries of an Internet Lover(2006), Paper Aeroplanes(2013), and The Cows(2016).

The So Lucky Novel writer, Dawn O'Porter was born as Dawn Porter on January 23, 1979, in Alexandria, Dunbartonshire, Scotland, UK. However, Dawn grew up and raised by her aunt in Guernsey after the tragic death of her mother when she was just 7 years old. However, her father is Scottish and still lives in Scotland. She holds a British nationality and belongs to white ethnicity. Further, Dawn went to Liverpool Institute for Performing Arts for studying acting. But, later at the third year, she realized that acting was not for her. So, she also worked at television series Baddiel and Skinner Unplanned for gaining experience rather than taking part in a school production.

41 years old, Dawn is a married woman. She is married to long time boyfriend turned husband, Chris O'Dowd. Further, Chris is an Irish actor and comedian. Before the wedding, the couple dated each other for over the several years following a 7-month-long engagement. Finally, they walked down to the aisle and tied the knot on August 26, 2012.

Their wedding took place in the presence of family and friends at an intimate ceremony in London. After, the wedding  Dawn changed her name from Dawn Porter to Dawn O'Porter. Since then Chris and Dawn is living a happy married life. They seem so deep in love and never felt to express their love for each other.

Besides, there is no news of there separation and divorce to date. We can often see them hanging out and going on vacation. Apart, the duo also shares two sons form married life. As of now, she is just enjoying her happy family moment with her husband and two children.

Yes, 175 cm tall Dawn is a proud and happy mother of two children from her married life. Moreover, the couple became parents for the first time with a baby boy, Art O'Porter on January 25, 2015. However, they shared the news after a week of their son's birth through twitter on February 1, 2015.

On the other, the couple also became parents for the second time when she gave birth to a baby boy, Valentine O'Porter on July 1, 2017. Currently, both of them are busy taking care of their children's physical and psychological development. So, they didn't have to share any photo of their children to the public yet. As of now, she is enjoying her motherhood life with her husband and two children.

British writer, director, actress, producer, and television presenter, Dawn may have collected a huge amount of money form her  career. Further, her estimated net worth is $750K as of 2020. However, her exact net worth is yet unavailable. Lynn Marie Latham and Lindsay Harrison are some of the renowned writers.  Besides, her novel like So Lucky and  Paper Aeroplanes is doing pretty good in the market.

Apart, she is quite popular on Instagram with the following of 435K followers which might earn her around $1,000 per post. On the other hand, her husband Chris has a net worth of $6 million. He earned this hefty amount of money from his career as an Irish actor and comedian.

Apart, O'Porter also does charity works for children and women's health and empowerment. Further, she was one of the founding members of the charity Help Refugees. With such a hefty earning, she is living a lavish life with her husband and two children.

Dawn is a talented writer and TV presenter. She rose to fame  for the first time when she attempted to slim down to a size zero by using drastic dieting for the BBC documentary Super Slim Me in 2007. Besides, she is famous for her books Diaries of an Internet Lover published in 2006. Apart, she also released her novel, So Lucky in October 2019.

Apart, she also presented the product testing section of How to Look Good Naked on Channel 4 with Gok Wan, a British fashion consultant, author, and television presenter. She is also famous for her books Paper Aeroplanes(2013), and The Cows(2016).