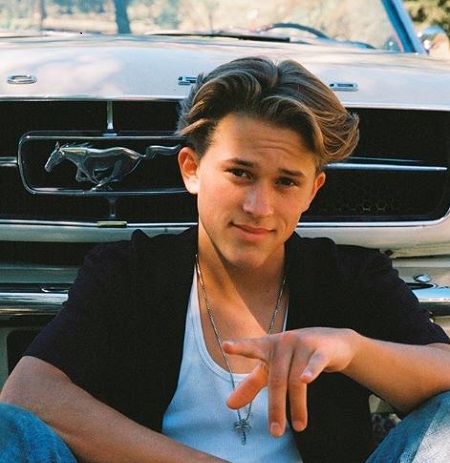 Deacon Reese Phillippe is an American musical artist who is best known as the youngest child of Reese Witherspoon, and her ex-husband, Ryan Phillippe. Recently on July 10, 2020, he has dropped his first single, Long Run, by Kayleigh Roberts. he composed the track and Nina Nesbitt gives the vocals.

His mother Reese who is Emmy Award-winning received wider popularity for her character as Elle Woods in the comedy Legally Blonde in 2001. Whereas her dad, Ryan came to fame after starring as  Billy Douglas on the soap opera One Life to Live.

Does Deacon Have a Girlfriend?

Yes, the blue-eyed, Deacon, the 16 years old is more single. He introduced his girlfriend Marine DeGryse through his Instagram post on April 27 2020.

He wished his girl Marine a very happy birthday by posting the cosy photos of two amid coronavirus. He captioned: "Happy birthday to the most amazing girl I know. I love you more every day". And it seems that his parents, Reese and Ryan have already approved their love romance.

Little Fires Everywhere star greeted her saying: "Happy birthday, sweet girl!" while Ryan also wrote: " happy birthday". But surprisingly, Deacon deleted the post so that they could be dating behind the camera.

Apart from his love life, Phillippe, the 5 ft 9 inches tall enjoying playing basketball and ski. Not only this, he frequently makes funny tiktok videos along with her mom. Along with this, he is close to his father, who oftently shares pictures with him on his IG account.

Has One Biological Sister and Two Half Siblings

Yes, Deacon is blessed with three beautiful siblings. His older biological sister is Ava Elizabeth Phillippe, who was born on September 9, 1999. She is a student at UC Berkeley. Ava debuts her modelling career with the appearance of Rodarte’s Fall 2018 collection alongside Danai Gurira, Tessa Thompson and Halle Bailey.

While his half brother Tennessee James Toth was born on September 27, 2012, and half-sister Kai Knapp was born on 1st July 2011. Today, Reese definitely loves his siblings and is spending a great time with them.

Also, her sister Ava, the elegant model mentioned him as her best friend. By posting the photo of brother and sister, Elizabeth Phillippe captioned: " ...when did my little brother become one of my best friends?" on her Instagram post.

Well, his mom, Witherspoon 44, and Phillippe, 46 are no longer together. They first met at a party for her 21st birthday in March 1997 and started dating within months.

Later, they engaged in 1998. After knowing each other, the pair decided to share wedding vows on 5th June 1999 in a private ceremony. Their special day took place at Old Wide Awake Plantation in a South Carolina Plantation.

Durig their nuptials, Witherspoon was six months pregnant with their first baby Ava. Later in 2003, they welcomed their son Deacon.

The Divorce Announcement of Parents

Their marriage officially ended on October 5, 2007, and settled on June 13, 2008, sharing joint custody of their kids. Now both of them agree to blame the reason behind their divorce was their age.  "I think more of the problem was age. When we got together we were so young," Ryan once stated.

Despite their disputes, the exes still remain friendly. They even were seen spending family time together with their kids.

After the divorce, two Golden Globe Awards' winner Reese started dating Jim Toth in February 2010. He is a talent agent and as well as co-head of motion picture talent at Creative Artists Agency.

They became engaged in December 2010 and tied the knot on March 26, 2011, Libbey Ranch in Ojai, California. Two years later, they gave birth to Tennessee James in 2012 and has been happily married for a decade.

On the other hand, Ryan, 1.75 m tall started dating Australian actress Abbie Cornish in 2007. They first met on the set of film Stop-Loss and parted their ways in February 2010 after three years of love romance.

Phillippe subsequently dated Pitch Perfect actress, Alexis Knapp in the summer of 2010 but spilt in September 2010. After the breakup, Alexis came to know that she was pregnant with Ryan's child. Being single and still unmarried, she decided to give birth to the baby and welcomed Kai in 2011.

Then, he dated his girlfriend, Paulina Slagter in late 2011. But in 2011, they were separated when Paulina accused Ryan harassing her via text messages.

In the year 2017, he dated model Elsie Hewitt. But within a year the pair called spilt because Hewitt accused Ryan of hitting her while he counter-sued her, denying the allegations. Finally, the case was settled on October 2019.

As of 2020, Deacon Reese has an estimated net worth of $1 Million. He is an aspiring musical artist and model has just made his way in the music and modelling field.

On the other hand, his sister, Elizabeth Phillippe also started working as a model. She has done modelling for Vogue and her mother's Fashion Brand, Draper James. So her net worth is valued more than $500 thousand.

Meanwhile, his mother, Reese Witherspoon, an actress, producer, and entrepreneur is regarded as one of the highest-paid actresses in the world. Over her entire career, she has earned various awards including Academy Award, Emmy Award, and two Golden Globe Awards.

As of 2020, Witherspoon has a whopping worth of $200 million. Today, she makes $20 to $40 million per year. She reportedly paid $1.25 million per episode for her role on the Apple TV show The Morning Show. Between August 2017 and 2019, she earned $55 million including films payroll, producing earnings and various endorsements.

When Deacon Was Born?

He was born on 23 October 2003 in Santa Monica, California, United States. His middle name Reese is dedicated to his mother. Her grandparents are Susan Phillipe, John Witherspoon, Betty Reese, and Richard Phillippe.

His aunties are Kirsten Phillippe, Katelyn Phillippe, Lindsay Phillippe and uncles are John D. Witherspoon. Concerning his education, Phillippe studied at the Private Elite School. So far, he holds American citizenship and belongs to the white ethnicity.